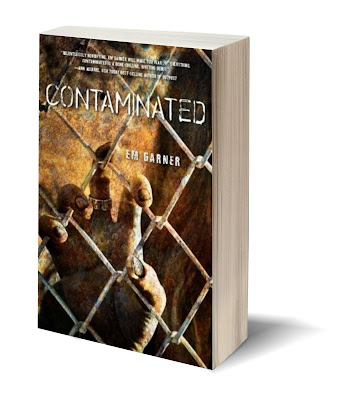 After the Contamination—an epidemic caused by the super-trendy diet drink ThinPro that turned ordinary citizens into violent, uncontrollable creatures—the government rounded up the "Connies" to protect the remaining population. Now, two years later, the rehabilitated are being allowed home, complete with shock collars that will either control, or kill, them.Velvet Ellis has struggled to care for her ten-year-old sister since her parents were taken in the round up. When she finds her mother in one of the "Kennels," Velvet resolves to do whatever it takes to put her family back together. But the danger isn’t over. It’s beginning all over again…

Contaminated started off a little slow. We meet Velvet and Opal who are sisters. Velvet only does half a day at school, the other half she works so she can look after her sister. Velvet is also out looking for her mum. After Velvet finds their mum, who they try to integrate back into society. Though they aren't accepted, and are forced to move back to their home pre-contamination days.
The story picks up pace after they find their mum. It's interesting, learning about the Connies and watching how their mum reacts. The latter half of the novel held my attention better.

We don't really get to see a lot of Opal, but I liked what we did get to know about her, and with her being young you can understand her ability to except change the way she did.
I wasn't sure about Velvet, until the school scene with the principal. Her little speech to him was awesome, and something I could totally see myself do if I were in her shoes. From that point on my opinion of her went up and I decided there and then that I liked her too.

Dillon is Jean's son, she runs the Conkennel for found Connies (Contaminated people). Dillon turns into the love interest. I really liked Dillon. I'm not sure why, he was just a nice character to read.

Overall, I enjoyed the story, the best part being the reactions and changes in Velvets mum. I'm interested to see on what is happening now though, as the book left on a slight cliffhanger - things are changing again, but now we don't know how.

On a side note, I wish to whine about the cover and title change. Originally it was called Velvet and this was the cover:

I think that bright cover is awesome and eye catching, while the new cover seems mass market and common. Also since the Connie's aren't really zombies the current cover isn't suitable.