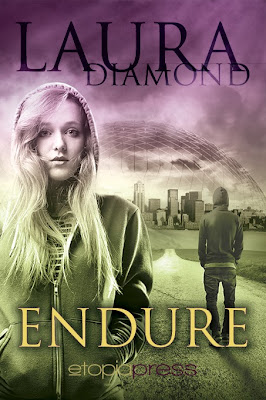 Summary from Goodreads:
Seventeen-year-old Justin's anemic blood is a blessing. Or a curse. It all depends on who you ask.

To most of the immortal Vie, his blood is a scourge: untouchable and useless. To some Vie, his blood is a drug. To Justin, it’s something that gets him in a lot of trouble. Being poisoned by a Vie is just one example. His sister getting kidnapped is another. Whether it’s being coerced by a deluded cult leader, or negotiating with Alex—an Vie scientist addicted to Anemie blood—Justin struggles to keep every mutated drop of blood he’s got.

His fight for survival gets more complicated when he meets Alex’s slave, Cara. Despite coming from different worlds, they’re both prisoners, at risk of being drained by a hungry Vie any moment. When she risks her own neck to help Justin find his sister, he's left with a terrifying choice.

Saving what's left of humanity.
Saving his sister. Saving the girl he loves.
Or sticking a stake in Alex’s chest.
Justin can't decide which option will get him killed first.

A siren broke the night’s tense silence. I cringed at the growing sound. “They’re stopping here, Justin.” Sammie huddled closer to me, trembling. “Shhh.” I smoothed her greasy hair. Blazes, maybe this was our time to die. Dim outlines of the other Anemies dotted the otherwise bare room. We all crouched lower, as if curling into living meatballs would prevent the Vie from attacking us. “I’m scared.” Her shrill voice shredded my ear drums. I covered her mouth with my hand, but she pawed me away. She hated the feeling of suffocation. “You have to be quiet.” They could hear our whispers, but we didn’t have to attract more attention than necessary. I grimaced at the salty, dank odor of sweat emanating from my pores. They could smell us, too, even sense our decay. No wonder they hated us. Our stench. Our weakness. Such a contrast from their perfection.

Laura Diamond is a board certified psychiatrist and author of all things young adult paranormal, dystopian, horror, and middle grade. Her short story, CITY OF LIGHTS AND STONE, is in the DAY OF DEMONS Anthology by Anachron Press (April 2012). Another short story, BEGGING DEATH, is coming soon in the CARNAGE: AFTER THE END Anthology by Sirens Call Publications. Her Young Adult Paranormal Romance novelette NEW PRIDE was published November 2012 and her novel SHIFTING PRIDE is coming December 7, 2012 from Etopia Press. When she's not writing, she is working at the hospital, blogging at Author Laura Diamond--Lucid Dreamer (http://lbdiamond.wordpress.com/), and renovating her 225+ year old fixer-upper mansion. She is also full-time staff member for her four cats and a Pembroke corgi named Katie.