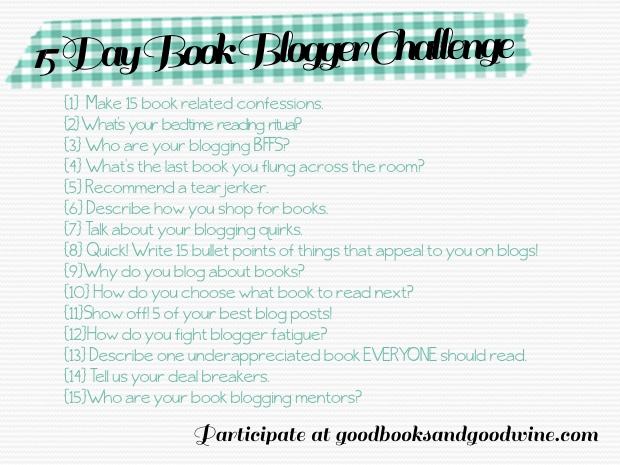 Day 14: Tell us your deal breakers.

I'm not sure I'd classify them as deal breakers, as I'll usually will read past them anyway and just rate the book accordingly, but I'm not fond of:
If I'm just not getting into the book after reading 100 odd pages that's a DNF for me.

The number 1 thing that is a deal breaker where I won't even bother to pick the book up are authors having 'foot in mouth' syndrome. I have a fairly decent size list of books I just won't bother with because an author has said/made public one of the following:
This is a brief sum up of some of the issues that came to light in 2012 and have continued this year as well. They stuck with me as it was right when I was just starting out on Goodreads and blogging. I'm not talking about authors that get upset at personal attacks to themselves (I can understand that, it's what I'm talking about for reviewers), I'm talking about authors that go out of their way to tweet, facebook, blog post, and/or comment on a negative, or not as highly rated as they'd had wanted, review of their book.
This is controversial, and I know it, but I have sat back and never said a word about it. I have however always made note of who has had such a 'meltdown' and decided that I won't contribute to them having a further meltdown, I'll just stay far away... from their books.
For me, it is the number 1 deal breaker - attacking a reviewer over their opinion of your book.