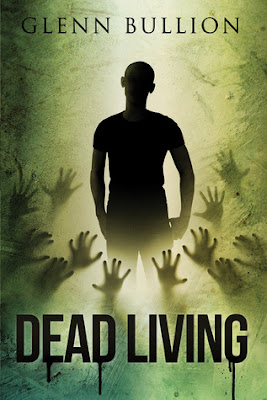 Born on the day everything ended, a world filled with the walking dead is the only one that Aaron knows. Kept in seclusion, his family teaches  him the basics. How to read and write. How to survive.

Then Aaron makes a shocking discovery. The undead, who desire nothing but flesh, ignore him. It’s as if he’s invisible to them.

I didn't know what to expect with this book. I have only read one other zombie book and loved it, and that was for a blog tour too. So I jumped at the chance to read and review another blog tour zombie book, and I'm glad to say I wasn't disappointed.

This started a little slow and predictable. The first chapter had a few hick ups (Sidney instead of Sydney, a few detail errors; ie, a zombie stuck in the truck who couldn't get out and was there for most of the chapter until the last paragraph where he somehow managed to get out) but nothing serious. There was a jump in time (14 years of it) which threw me a little because I thought the initial characters were going to be the story but they were more background details. After that the perspective changes and from there onwards it only grows in both story and pace.

I didn't grow attached to Samantha but I did like that she grew as a character within the story. Aaron was by far the best character. I loved his interaction and calm demeanor. They were the main lead characters though there were some other 'shady' characters that you weren't really meant to like anyway and the rest of the characters were more of a 'supporting cast'. This is a zombie book that is fairly focused on the romance more than the zombies. There isn't much detail to how the outbreak started but more of the life after it has happened and evolution.

There are some twists to keep the story interesting, and some blood and gore but not a whole lot. It's a quick read and would be a good place to start if you haven't read a zombie book before.

Author Bio
I live in Maryland with my wonderful wife and four cats. I love gaming, computer technology, movies, and of course, reading and writing. I love science fiction and especially horror and the paranormal. Ghosts, vampires, werewolves, zombies, anything supernatural, all beautiful subjects.

I’ve been writing since I was twelve years old. There’s just something about creating a story that I like. I always try come up with something that hasn’t been done, or is unique in some way. It could be someone with demonic powers, or something much more simple, such as a person that zombies ignore. It’s fun to create a character, give him or her a personality and background, and watch them evolve through a story.

I’ve tried other subjects, but always drift back to horror and paranormal. There’s a reason why we keep going back to horror movies and books, why they’ve made fifty Friday the 13th movies. People like to be scared, but more than that, I think paranormal and horror stir the imagination like nothing else. We’re all just a little nervous to open that closet door at midnight, or look under the bed.