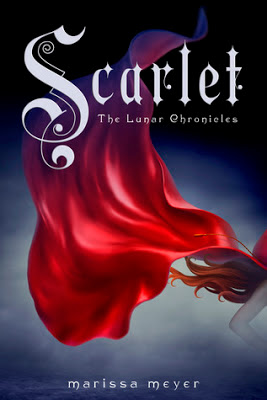 Cinder returns in the second thrilling installment of the New York Times-bestselling Lunar Chronicles. She’s trying to break out of prison—even though if she succeeds, she’ll be the Commonwealth’s most wanted fugitive.Halfway around the world, Scarlet Benoit’s grandmother is missing. It turns out there are many things Scarlet doesn’t know about her grandmother and the grave danger she has lived in her whole life. When Scarlet encounters Wolf, a street fighter who may have information as to her grandmother’s whereabouts, she has no choice but to trust him, though he clearly has a few dark secrets of his own.As Scarlet and Wolf work to unravel one mystery, they find another when they cross paths with Cinder. Together, they must stay one step ahead of the vicious Lunar Queen who will do anything to make Prince Kai her husband, her king, her prisoner.

Review
I finished Scarlet by Marissa Meyer today. I have been wanting to read it ever since I read Cinder mid last year. The Lunar Chronicles is easily my new favourite series and Marissa Meyer, well I think I'll forever read anything that she wishes to write.

Ok, that's a little better. Seriously though that is pretty much how I felt and feel before, during and after reading this.

I adored the characters. Cinder is still the same strong, loveable character she was in the first book. New editions of Scarlet and Wolf - I loved them both. Scarlet is strong, determined,  and stubborn, and Wolf who isn't meant to be sweet and caring, is. Iko is back, though very different with the same charming character I loved in Cinder. Another addition is Thorne, and I'm sure I read someone else mention that he is like Sawyer from Lost (I have no idea where I read that, if I come across it again I'll link their review. Sorry!) and that is just as I pictured him too.

Where some second books in a series serve to be "fillers" to tie the first and third books together, Scarlet most definitely wasn't. Scarlet carries the story on from Cinder and develops it further. With plenty of things happening throughout the story to keep you interested.

Marissa Meyers writing is natural and fluent. She has easily made my favourite authors list.
If you haven't read Cinder yet, I highly recommend you do. Then read Scarlet.

No review I do on this book, or series will ever do it justice. I simply can not find the right words or feelings to describe these books to you. Just read them.

Thank you to Penguin Australia for providing a copy for review

I live in Tacoma, Washington, with my fiancé and our two cats. In addition to my slight obsession with books and writing, I'm big on road-tripping, wine-tasting, and hunting for antiques. I'm represented by Jill Grinberg.CINDER, my debut novel, is a futuristic re-envisioning of Cinderella in which Cinder is a cyborg mechanic. Release date: 3 Jan 2012.