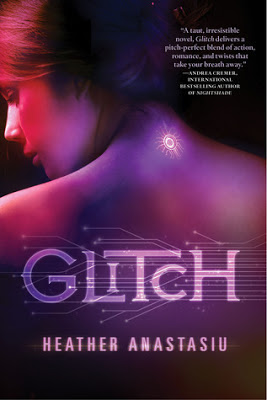 In the Community, there is no more pain or war. Implanted computer chips have wiped humanity clean of destructive emotions, and thoughts are replaced by a feed from the Link network.When Zoe starts to malfunction (or “glitch”), she suddenly begins having her own thoughts, feelings, and identity. Any anomalies must be immediately reported and repaired, but Zoe has a secret so dark it will mean certain deactivation if she is caught: her glitches have given her uncontrollable telekinetic powers.As Zoe struggles to control her abilities and stay hidden, she meets other glitchers including Max, who can disguise his appearance, and Adrien, who has visions of the future. Both boys introduce Zoe to feelings that are entirely new. Together, this growing band of glitchers must find a way to free themselves from the controlling hands of the Community before they’re caught and deactivated, or worse.In this action-packed debut, Glitch begins an exciting new young adult trilogy.

Review
Glitch is set in a world where the atmosphere above ground is deadly and living underground is the only option. People are implanted with a chip that controls human emotion, effectively making them living breathing robots.

Zoe is our protagonist and she has found herself 'glitching'. That is her connection to the Link (a network that the chip connects all people too) fails, letting her experience emotions and life for "real". Having grown up with the link connection, you can understand her naivety in the situations she gets caught up in. I liked Zoe as a character and found her to develop well considering the situations she was put in and that she couldn't let any one know she was glitching.

Max is Zoe's friend, and I have no intention of giving any of the story away, so the only thing I can say about him is that I didn't like him. He was a well written character, who I believe you really aren't meant to like.

The world building was well done, I had no problems picturing the situations and locations, nor the world that it was.

I made the mistake of holding out to write this review until after I have read Override so I could write and publish both around the same time. My lack of notes on this one isn't helping either. It is also difficult to discuss the story without giving anything away. So the only thing I can say is if you like dystopian based novels, give this a whirl. I enjoyed it, it well written, and the following book, Override, was even better. ;)