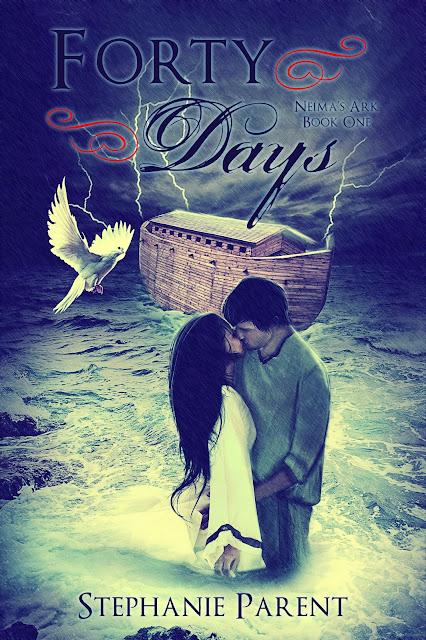 Description
The entire village knows Neima’s grandfather is a madman.  For years the old man has prophesied that a great flood is coming, a flood disastrous enough to blot out the entire earth.  He’s even built an enormous ark that he claims will allow his family to survive the deluge.  But no one believes the ravings of a lunatic…

…until the rain starts.  And doesn’t stop.

Soon sixteen-year-old Neima finds her entire world transformed, her life and those of the people she loves in peril.  Trapped on the ark with her grandfather Noah, the rest of her family, and a noisy, filthy, and hungry assortment of wild animals, will Neima find a way to survive?

With lions, tigers, and bears oh my, elephants and flamingos too, along with rivalries and betrayals, a mysterious stowaway, and perhaps even an unexpected romance, Forty Days is not your grandfather’s Noah’s Ark story.

Forty Days is approximately 45000 words, the length of a shorter novel, and is the first installment in a two-part epic story.  It does contain a cliffhanger ending.
Readers looking for a traditional, religiously oriented version of the Noah’s Ark story should be warned that Forty Days may not appeal to them.  The novel will, however, appeal to lovers of apocalyptic fiction, historical fiction, and romance, as well as anyone who’s ever dreamed of having a baby elephant as a pet.

Stephanie Parent is a graduate of the Master of Professional Writing program at USC and attended the Baltimore School for the Arts as a piano major. She moved to Los Angeles because of Francesca Lia Block's WEETZIE BAT books, which might give you some idea of how much books mean to her. She also loves dogs, books about dogs, and sugary coffee drinks both hot and cold.