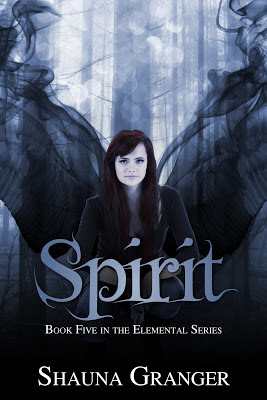 Not even a guardian angel is more powerful than Death.

Always careful to watch out for others, Shayna put too much trust her abilities to keep herself safe and has been cut down by crazed man. Now she is trapped in the land of the dead, watching as her two best friends suffer the consequences of her death; their powers are fading and soon they will too. Shayna is desperate to return to the land of the living to save them from a similar, cold fate. To save her friends Shayna must turn away from the Light and, in doing so, sacrifice her wings.

But the longer Shayna stays among the dead, the further she slips from sanity. If Shayna cannot find her way back she will be condemned and lost forever among the restless souls of the dead. With nothing left to lose, she will do whatever it takes to fight her way back, with or without her wings.

Like so many other writers, Shauna grew up as an avid reader, it was in high school that she realized she wanted to be a writer. Five years ago Shauna started work on her Elemental Series and released the first installment, Earth, on May 1, 2011. When not reading and writing, Shauna enjoys cooking and playing hostess whenever she can.