Author Interview
After "finishing" a version of this novel once titled "Little Alien"--you then hired an editor, and gutted some 375 pages down to a mere 119, before writing your way back to its current state. Why put yourself through this torture?  The novel just wasn't working. It was masking its flaws under fancy plot twists and implausible characters. Because of its partial Las Vegas setting, I thought I could get away with some big flights of fancy. Ultimately I came to see that it's a novel about two girls/women and their personal secrets/power. Coming back to that focus allowed me to access the real story I wanted to tell.

An early title of this novel was Little Alien, referring to Grace’s sense of being different and possibly even invoking her shame about her appearance. What led you to change the title?
I think in earlier drafts, as I was getting to know Grace I was exploring her through the lens of her alienation, her isolation because I couldn’t yet understand what being a burn survivor was like (indeed, I called her a burn “victim” then). But after talking with some burn survivors, and eventually casting off some superfluous and unnecessary fanciful plot twists, in the last big revision I came to see that there was far more material to probe in her coming back to the world, in the dark landscape of her friendship with her wild friend, and in actively connecting with people; so Little Alien no longer felt right. This is a book about Grace coming into her right to be alive, her power.

Let's just get this out of the way: Your character heals people. So is it magic, or is it the Memorex (sorry, 80s throwback!): Sigh. I guess that's a question each reader has to answer for herself. There are real cases of people healing others, and an entire industry that professes to be able to do so now--is acupuncture, Reiki, therapeutic touch and more, magic? On the one hand, I think you can take the healing gift as a metaphor; on the other, you can choose to see it as real. What's most important is how the "healing" works in Grace and what it does for her story.

Grace can heal others but not herself – something I think a lot of people can relate to in a metaphorical sense. Why do we have such a hard time letting go of our own struggles and hurts even as we encourage others to do so?
Yes, you've tapped into one of the major themes of this novel. One of the things Grace and I share in common is what I've come to call “extreme empathy”--sometimes I identify so strongly with the pain of others that I can’t figure out where my own begins/ends.  I think it’s difficult to let go of our own struggles because they’re adaptive, they were our coping mechanisms as children and as adults we still get something out of them. Until we learn new strategies, we’re screwed.


You have an erratic writing process, care to share?
Yes, I write this elaborate outline, sketching out the characters and their problems, and then proceed to completely depart from it. Somehow I take comfort in an outline, no matter that I rarely stick to it. I need to pretend I know where I'm going.

You were raised in Northern California by hippies. How did that influence your work?
My parents were New Yorkers drawn to the wild, free spirit of California in the early 70s, raised on a healthy diet of 60s civil rights activism.  Their best friends were astrologers, artists, Reiki practitioners and massage therapists among other things (Yes, I speak New Age). I think that my upbringing  left me open at the edges. I wasn't raised in a religion, so there was a lot of seeking and exploration without anyone telling me if I was doing it right or wrong. While that may also come with its own set of problems, it left me interested in that edge of life that we can't fully explain, which turns up in all of my writing: healing powers, prophetic dreams, the creative spark that exists in artists... And I was an avid reader, and an only child until I was 14, which may have had more to do with my writing aesthetic than anything. 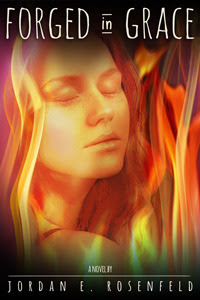 Grace Jensen survived a horrific fire at age 15. The flames changed her: badly scarred in body and mind, Grace developed an ability to feel other people’s pain. Unable to bear human touch, she has made a small life for herself in Northern California, living with her hoarder mother, tending wounded animals, and falling a little in love with her former doctor. Her safe world explodes when the magnetic Marly Kennet reappears in town; Grace falls right back into the dynamic of their complicated friendship. Marly is the holder of many secrets, including one that has haunted Grace for over a decade: what really happened the night of the fire?When Marly exhorts Grace to join her in Las Vegas, to make up for the years they have been lost to each other, Grace takes a leap of faith and goes. Although Marly is not entirely honest about her intentions, neither woman anticipates that enlarging Grace’s world will magnify her ability to sense the suffering of others—or that she will begin to heal wounds by swallowing her own pain and laying her hands on the afflicted.This gift soon turns darker when the truth of Marly’s life—and the real reason she ended her friendship with Grace—pushes the boundaries of loyalty and exposes both women to danger.

Jordan E. Rosenfeld learned early on that people prefer a storyteller to a know-it-all. She channeled any Hermione-esque tendencies into a career as a writing coach, editor and freelance journalist and saves the Tall Tales for her novels. She earned her MFA from the Bennington Writing Seminars and is the author of the books, Make A Scene: Crafting a Powerful Story One Scene at a Time (Writer’s Digest Books) and Write Free! Attracting the Creative Life with Rebecca Lawton (BeijaFlor Books). Jordan’s essays and articles have appeared in such publications asAlterNet.org, Publisher’s Weekly, The San Francisco Chronicle, The St. Petersburg Times, The Writer and Writer’s Digest magazine. Her book commentaries have appeared on The California Report, a news-magazine produced by NPR-affiliate KQED radio. She lives in Northern California with her Batman-obsessed son and Psychologist husband.