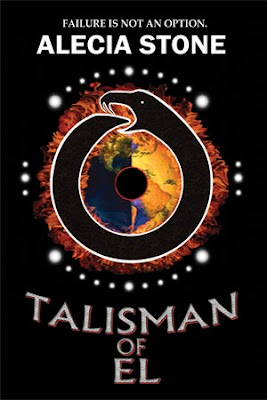 WHAT IF YOUR WHOLE LIFE WAS A LIE?

When 14-year-old Char­lie Blake wakes up sweat­ing and gasp­ing for air in the mid­dle of the night, he knows it is hap­pen­ing again. This time he wit­nesses a bru­tal mur­der. He's afraid to tell any­one. No one would believe him ... because it was a dream. Just like the one he had four years ago - the day before his dad died.

Char­lie doesn't know why this is hap­pen­ing. He would give any­thing to have an ordi­nary life. The prob­lem: he doesn't belong in the world he knows as home.

He belongs with the others.

Talisman of El is an wonderful story with a an interesting take on angels and mythology.
A story of Charlie, an orphan, who finds a home with Jacob, but Jacob is not who he pretends to be. Life takes in interesting turn when Charlie crosses paths with some he had dreamt about.

I enjoyed the dynamic between Charlie and his friend Alex (girl), though I felt they were a touch too mature for 14 year olds. I liked the majority of characters though there were several that were fleetingly introduced, but for what reason I wasn't sure.

The world building was sketchy at times. There were times when I thought where are you, how did you get there...... whoa how did you get back. I also found the pacing uneven, which didn't help in keeping my interest. There were a few times I thought this would be a DNF for me. However, the story was interesting enough that I wanted to know what would happen.

The second half of the book is based in 'another world' Arcadia. This was a fascinating world but I wish there would have been more detail about the world and its existence. The angels and mythology was captivating. There were a lot of characters introduced in this section which made it hard to keep up with who is who, but most were reoccurring and you got to learn a little about them. There were parts that felt a little rushed, mainly with the action parts.

I know my review sounds a little negative, but I did enjoy this. I have just found it difficult to put this book into words without giving any details away about the story and most of the problems I have brought up don't detract from the story.

Overall the Talisman of El is a enjoyable and entertaining story that I'm sure a lot of fantasy fans with love.

Thank you to Alecia Stone, Centrinian Publishing and Netgalley for the eARC!

Alecia Stone is the author of Talisman Of El (Centrinian, 2012), the first book in the Talisman Of El trilogy. She graduated with a BA in Film & TV and has worked in television for a short period of time before branching out into storytelling. Alecia loves anything and everything paranormal. Her fascination with all things supernatural sparked her obsession with books, particularly young adult fantasy fiction, which she has never grown out of. She was inspired to become an author after reading Pride and Prejudice by Jane Austen at the age of fourteen.

In 2008, Alecia started working on Talisman Of El, a contemporary young adult fantasy fiction inspired by people who disappeared mysteriously, including, but not limited to, Amelia Earhart and Percy Harrison Fawcett, who went on an expedition in search of an ancient lost city. When she isn’t writing, she enjoys going to the movies, listening to music, and travelling.

Talisman Of El is her first novel. At present, Alecia lives in England, United Kingdom with her family.