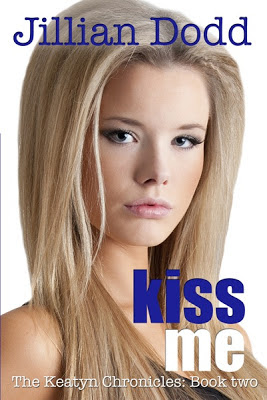 Title: Kiss Me (The Keatyn Chronicles, #2)

I’ve always written scripts for my perfect life.
But no way could I have ever scripted this.
My life is so far from perfect, it’s not even funny.
All because of a stalker.
I’m at a boarding school where I have to lie about who I am.
I can’t see my family.
I’m tutoring a hottie god that tortures me with his smile.
The most popular girl already hates me.
But there’s this boy.
This hot, sweet, sexy boy.
So I’m going to stop trying to script my life and just live it.
Because who knows how long I have left.

After halftime, I once again find myself in Dawson’s big athletic hoodie. It goes down to my knees. He’s sitting behind me in the bleachers, and I’m leaning back between legs.
Dawson slides a cool hand under the sweatshirt. I assume to get warmed up.He casually strokes my side and then my stomach.
It feels nice, so I snuggle closer to him.
But as soon as I snuggle in closer, his hand dives down the front of my shorts. His back is leaned tightly into mine and his chin is resting on my shoulder. I turn my head just a little toward him and warn, “Dawson.”He gives me adorable kiss on the cheek and pushes his hand further down.
Then he starts rubbing me, um, down there.
At first I think he’s just sort of teasing me. Trying to get me to go back to his room. But he very quickly stops teasing and gets down to business.I know I should tell him to stop. He should not have his hand down my shorts when we’re in the bleachers at a football game.
But because his sweatshirt is so big, no one can tell.
And what can I say?I like it.
It feels really good and really naughty.
I try to keep my breathing steady, but he can tell that it’s not working. Or, well, that what he’s doing is definitely working.
I can feel his mouth form a smile on my neck.
I grab his bicep tightly.Then close my eyes and miss a few plays. We don’t stand up and cheer when someone makes a big play. I can’t even clap. I’m breathing heavily. Gripping his bicep with all my might. Begging him with my grip not to stop.
The team scores, everyone stand up to cheer, and Dawson takes that moment to do a little scoring of his own. And then, I find myself cheering too, but for different reasons.
OHHH, GOOOOO TEAM!“You’re so naughty,” I whisper to him.“You so liked it. Can we please go back to my room? Like, now. We’ll just kiss, I swear.”“We won’t just kiss and you damn well know it.” 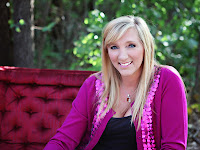 Jillian Dodd grew up on a farm in Nebraska, where she developed a love for Midwestern boys and Nebraska football. She has drank from a keg in a cornfield, attended the University of Nebraska, got to pass her candle, and did have a boy ask her to marry him in a bar. She met her own prince in college, and they have two amazing children, a Maltese named Sugar Bear, and two Labrador puppies named Camber Lacy and Cali Lucy.
She is the author of the That Boy Trilogy and The Keatyn Chronicles Series.

Giveaway 1:
(2) eBook sets of STALK ME and KISS ME (copies will be gifted from Amazon or Barnes and Noble) – Open International

Giveaway 2:
(2) Signed paperback sets of STALK ME and KISS ME and (1) Keatyn Chronicles Tote Bag – Open to US/Canada.