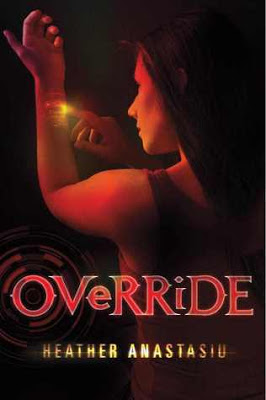 Zoe is free. She has escaped the enslavement of the Community, disconnected from the hardware that had controlled her every thought and emotion, and evaded capture by the Chancellor intent on killing her. She is finally free, but she is far from safe.Zoe and Adrien hide themselves from detection at the Foundation, an academy that trains teen glitchers to fight in the Resistance movement. Together, Zoe and her new team of superhuman fighters must risk their lives to rescue other glitchers and humans from the Chancellor's control. Challenges abound at every turn, and Adrien, who has become silent, distant, and tormented by his visions of the future, only adds to the growing certainty of defeat. But worst of all, as Zoe's team fights against impossible odds, distrust and betrayal leads to the terrible discovery that their greatest threat could already be lurking behind the safe walls of the Foundation.Full of high-adrenaline action and shocking twists, Heather Anastasiu's Override is an exciting continuation of this popular young adult trilogy.

Review
In Override we find that Zoe has escaped and working with the Rez. Override is an action packed sequel to Glitch.

I actually enjoyed Override more then Glitch. I can only put that down to the character development and the amount of action in this novel. From the close call escapes to the thrilling rescue, down to the sad realisation and loss. It all made for an amazing read.

Zoe grows in this novel both within herself and her power. The other glitchers that are with the Rez go through that same development. With all characters having there own issues, from who they are, to who they have to work with, to them evolving through the novel to the point that they can work together in the most difficult circumstances.

Both Max and Adrien play important roles in the story, with twists I never saw coming and shocking realisations. I can only hope something positive comes from it all.

I can not wait to see what Shutdown, the third (and I believe final?), book in the series is going to bring. If Override is any indication, it's going to be epic.

"No!" I screamed. A high-pitched buzzing erupted in my ears as all the Regulators turned toward me. I felt the rage gathering in my chest, building until it pouinded against my lungs. I couldn't contain it, and I didn't want to. My small frame shook until my teeth rattled, and then, with sudden hard pulse, my power exploded outward." (Loc 675, 22%, on my Kindle)


"Amazing, isn't it?" Adrien whispered. "I thought you might like to remember what beauty looks like. That, out there, that's freedom. Beauty. Life. Everything we're fighting for." (Loc 1504, 49%, on my Kindle)


"Adrien?" My Voice was small in the dark room. I couldn't see his face to tell whether he'd seen another vision, or if the weight of the world had suddenly secured itself back on his shoulders.He swore under his breath, jumping back to his feet. "I'm sorry. I can't do this." (Loc 2236 73%, on my Kindle)

These quotes are taking from an uncorrected proof and might change at the time of publishing.