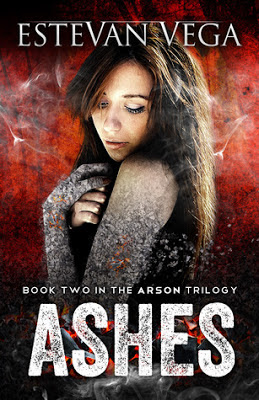 Summary from Goodreads:ASHES is a YA paranormal thrill-ride. Book 2 in the gripping Arson trilogy. MORE THAN THREE MONTHS HAVE PASSED SINCE ARSON AND EMERY WERE SUDDENLY TAKEN. TAKEN AND THEN SEPARATED. AND EXPERIMENTED ON.The minds running Salvation Asylum have abducted them for a dark purpose. A campaign has been set in motion to genetically alter mankind. Unknowingly, Arson has become the most vital instrument in this global scheme, initiated by a select group of brilliant scientists and cunning world leaders. Confused, trapped, and unable to fully manifest his abilities, Arson faces a new existence crawling with questions. Will he ever see Emery again? Is Grandma still alive? Can the fate of the human race really hang in the balance of one choice?Nightmare and reality collide in Ashes, book two in the gripping ARSON trilogy. Love will be tested. Powers will shift. And the past will invade the here and now as Arson discovers a part of himself he has never before known and fights against his own shocking origins. Will this boy who once tempted fire be able to take on a fearful future? When the struggle intensifies and secrets come to light, will Arson be ready to accept the haunting revelation that there may be others out there, others like him? 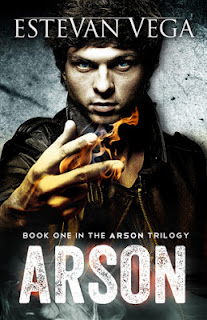 ARSON is the first book in a Young Adult Paranormal series. Book two, ASHES, is also available now. ARSON GABLE FEELS LIKE A FREAK. HE CAN CREATE FIRE. HE NEVER ASKED FOR IT. HE NEVER WANTED IT. BUT HE CAN'T SHUT IT OFF.Before now, three things were true: he both loved and despised his grandmother; his life was going nowhere; and he was alone. But when a strange girl--who feels more normal behind a mask than inside her own skin--moves in next door, Arson hopes to find something he's never had: purpose. After years of living in fear, he will be forced to confront his haunting past and embrace the unknown as he walks the fine line between boy and monster. Edgy, realistic, and breathtaking, Arson, the chilling chronicle of an isolated teenager with unimaginable ability, is set to ignite the hearts and minds of a new generation.


So there’s this story about a mad scientist named Victor Frankenstein who creates a certain piece-meal monster that, upon being jolted to life, starts running amuck, terrorizing townsfolk, attempting to simultaneously learn Spanish and the salsa dance, and ultimately becoming a royal pain in Victor’s backside. Okay, okay, I realize some of my facts aren’t a hundred percent true, but I get most of my knowledge from Wikipedia, so cut me some slack.


Mary Shelley’s dark tale of a creator being overwhelmed by his creation is both poignant and perplexing. How often do the things we create impact the paths of our lives? Think kids. Think controversial films. Think that spicy quesadilla recipe you whipped up last Thursday. You know the one. Yeah, the one that had you hunched over cra…we’ll just stop there. See? The things we create impact our day-to-day lives. But what does this have to do with anything? This isn’t some philosophy lesson, right? Why would I go on and on about Frankenstein and created choices and Mexican delicacies if not for a purpose?
The purpose is this: As an author, it is your job to create. But think about what that means. You create plots, lives, intersecting identities and challenges. You foster relationships and tear families apart. You give birth to viruses and sometimes, if you’re in a good mood and Adam Levine selects your favorite contestant that week then maybe, just maybe, humanity gets the cure. As the creator of the tale, you can spin any web you wish. But every sticky strand begets another one perhaps more powerful and with deeper consequences. One wrong choice could mean not only the end of a character’s existence, but the end of your relationship with your reader. Think about it. As an author, you flirt with landmines every time you open that Word doc. And every time you hit save, you tempt Fate.
This probably isn’t what you were expecting. Some deep, probing, analytical exposé on the intricacies of telling a good story, but I couldn’t help it. I had to go there. Part of being a good writer is being able to explore the way things work, the way creations are manufactured, designed, and we are designed. So with that in mind, we can begin to work, creating identities and emotions and pitfalls and salvations. Will our protagonists thrive in a wondrous garden of adolescence or be tossed into the scorching furnace of maturity? I often wonder if I’m creating a dialogue with my readers or if I’m burning a bridge. But over the years, clarity has come: I can’t keep every reader. Not every monster is meant to be created by every scientist. Similarly, not every mad scientist will find empathy among the masses. Some have loved my books; others have hated them; still others scratch their heads wondering what they just read. What does it mean? It means that in order to stay relevant, one must travel far and wide. One must find his or her own Transylvania. One must get reacquainted with the shadows of their lives and the spider webs of others. Take shelter in a certain kind of castle. Dare to take that leap. Dare to tempt Fate. And when that giant, that mechanical, fearful creation takes his first breath, you, rippling with dreadful wonder, will wander back into the light, perhaps scratching your head, perhaps blending in with the townsfolk as a result of cowardice. Or maybe, just maybe, your creation will not get the best of you. Maybe you will be proud of the beast you have re-animated. Perhaps you will find your purpose, your place among the madmen.
Tell me, amigo, what does your monster look like?
-evega

I’m a writer. Well, technically an author, because they say that you magically become an author (i.e. true creative) if you’ve published something, and you’re a writer if you haven’t (you know those closet aspiring geniuses who just scribble stuff into notebooks and hide it from the world?). But I still call myself a writer. I’m one of 4 brothers. The middle son. I guess that’s supposed to make me uber weird and dysfunctional, but the jury’s still out on that one. I love mint chocolate chip ice cream. Like, really love it. Watching movies and going to rock shows are 2 of my favorite pastimes, and I am addicted to telling stories.