ARC Review: If You Find Me by Emily Murdoch 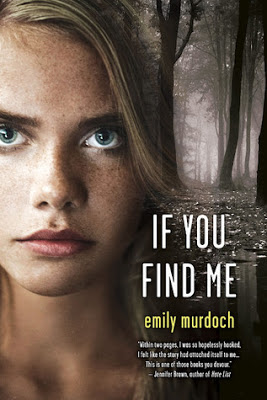 There are some things you can’t leave behind…A broken-down camper hidden deep in a national forest is the only home fifteen year-old Carey can remember. The trees keep guard over her threadbare existence, with the one bright spot being Carey’s younger sister, Jenessa, who depends on Carey for her very survival. All they have is each other, as their mentally ill mother comes and goes with greater frequency. Until that one fateful day their mother disappears for good, and two strangers arrive. Suddenly, the girls are taken from the woods and thrust into a bright and perplexing new world of high school, clothes and boys.Now, Carey must face the truth of why her mother abducted her ten years ago, while haunted by a past that won’t let her go… a dark past that hides many a secret, including the reason Jenessa hasn’t spoken a word in over a year. Carey knows she must keep her sister close, and her secrets even closer, or risk watching her new life come crashing down.

This is hard for me to review. I was so engrossed in reading it that I didn't make any notes!

Emily Murdoch's debut is an emotional story of child neglect, told from the view of Carey who with her sister were hiding in the woods for ten years with their mentally ill, drug using mother.

I found the characters so real and touching, like reading a true story. I felt for Carey and Jenessa and could understand their bod and why they were concerned about going back into society. No matter how awful their life was in the woods, it was all they knew. It was home. I really felt for them and wanted them to be able to adapt and grow into their new life.
Not too mention I adored Jenessa. ❤

There were a few elements that felt too convenient, such as Carey and Ryan's relationship, Delany's hatred of Carey switching in next to no time, and the ending. That said they weren't enough to detract from my enjoyment.

The one thing that did frustrate me and take away some enjoyment were the flashbacks. Ok, not the actual flashbacks, just the execution of them. There was no indication of a flashback happening. One mintue Carey would be thinking about something the next second it was a flashback. I understand that the thought or what was being said was triggering the flashback, but because it blended together, I was more often then not going....
Hopefully the published versions will have a new paragraph or different font for them or something.

Overall, this was a fantastic and emotional debut novel from Emily Murdoch. If you like contemporary mystery type books then add this one to your list.

Emily is a writer, a poet, and a lover of books. There's never a time she's without a book. Her debut novel, If You Find Me, will be available from St. Martin's on March 26, 2013 and from Orion/Indigo UK on May 2, 2013.When she's not reading or writing, you'll find her caring for her horses, dogs and family on a ranch in rural Arizona, where the desert's tranquil beauty and rich wildlife often enter into her poetry and writing.