A long time enthusiast of things that go bump in the night, Theresa started her writing career as a journalism intern—possibly the least creative writing field out there. After her first semester at a local newspaper, she washed her hands of press releases and features articles to delve into the whimsical world of young adult paranormal romance.

Since then, Theresa has gotten married, had three terrific kids, moved to central Ohio, and was repeatedly guilt tripped into adopting a menagerie of animals that are now members of the family. But don’t be fooled by her domesticated appearance. Her greatest love is travel. Having stepped foot on the soil of over a dozen countries, traveled to sixteen U.S. states—including an extended seven-year stay in Kodiak, Alaska—she is anything but settled down. But wherever life brings her, she will continue to weave tales of adventure and love with the hope her stories will bring joy and inspiration to her readers.

I'd like to welcome Theresa to the blog today, and thank her for her time to answer a few questions for us. =)

When/Where do you do your best writing?

First, my best writing happens when my kids aren't barging into my office every three seconds with something to tell, explain, give, or whine about. But of course that's rare while all three are home, so I try to do my writing while my two oldest kids are in school, and I'm in my office. The Dr. Seuss quote on my wall and a steaming cup of coffee are my best writing buddies. I never mind their company.

Do you have any writing quirks?

I have quite a few. Thankfully my editor is eternally patient. For one, my first draft usually has way too many overused words. "Looked" was the worst offender in The Stone Guardian. I believe there were over two hundred. *cringe*

What do you do when you get writer's block?

I stop. My best ideas come when I'm doing something completely unrelated to writing--washing dishes, driving, that kind of thing. When I'm quiet, it means my brain is working. Then I get an "ah hah" moment and rush back to my computer to solve whatever scene is holding me up.


What inspired the idea for your novel?

I knew I wanted to write about something unique, and I've always admired the Maya. With such a strong love for the paranormal in a contemporary setting, I came up with Riyata (ones with inner strength) which is the race you'll read about in The Stone Guardian. 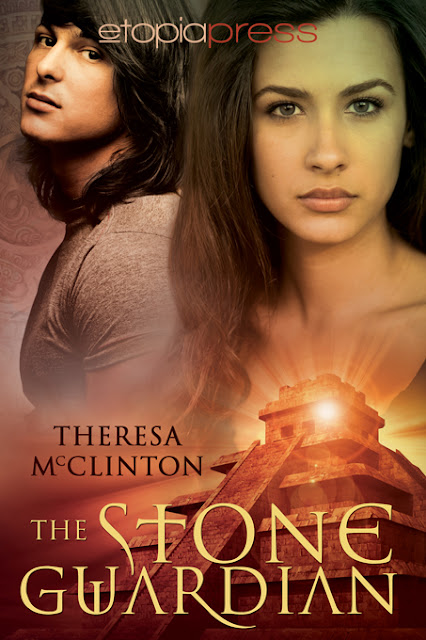 Description
Like any other teenager in America, Ashley just wants a normal life. But growing up in an orphanage for the insane is anything but normal. After endless therapy and increasing medication, her nightmares have only gotten worse.
Probably because they’re not nightmares.
When Ashley’s mysteriously abducted, she finds a reality even less normal than the orphanage. And she discovers something else—she’s no ordinary orphan. Faced with enemies thought to only exist in fairy tales, Ashley discovers she possesses a powerful Maya bloodline. She’s the daughter of an ancient Maya Guardian, whose duty is to protect the Stone of Muuk’ich, an enchanted relic blessed by the gods. But first she must get it back from Sarian, a power-hungry demigod who slaughtered the last guardian—Ashley’s mother. Without the stone, all will be lost.
When she meets Arwan, a hot Belizean time bender, his delicious olive skin and dark eyes make her feel a little less alone. But his gentle whispers and reassuring touch might not be all they seem. How can she balance love and duty when it’s up to her to prevent the rising of the underworld? Especially when the guy she loves might be its crown prince…