Book Blast & Excerpt: In The Band by Jean Haus 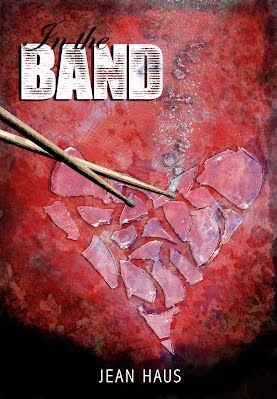 When family problems push Riley Middleton into giving up a percussion scholarship in another state and attending college from home, her friends push her to try out for a local rock band. Of course, Riley makes the band. She rules at the drums.

Riley soon finds out rock bands have a different dynamic than marching bands, especially when each of her male band mates has a major ego and is a major player. Two of them relentlessly flirt with her. The other—a dark, sexy rock god she can’t help being attracted to— is a total jerk and pushes her to quit. She becomes determined to ignore his rudeness and his hotness. Even if she was interested in jerks, a hook up would probably get her booted out of the ego-ridden band, and playing keeps her sane. Behind the drums, the world and her family’s troubles evaporate.

If she wants to stay in the band, Riley just has to ignore the growing sparks between her and her band enemy. But as she gets to know the man behind the stage persona, ignoring him proves to be more difficult than flowing through a time sig shift.

*New Adult/Mature YA for language and sexual situations.

Author Bio
Jean Haus lives in Michigan with her wonderful husband and son who, other than cooking, have taken over homemaking duties since she started writing more. When Jean isn’t writing, she’s usually reading. Anything from young adult to historical fiction as long as there is a bit a romance, she’ll load it on her Kindle. She loves to cook, and someday she will create the world’s best potsticker.

Excerpt
“We’re going to get started.”

I look up to find the guitar player standing in front of Marcus. He’s wearing a dark t-shirt and jeans. Nothing that screams hot. But he somehow does with that angle of hair across his face, the muscles noticeable under his shirt, and those full lips. My heart rate matches the jerking rhythm of my nerves. The guitarist nods toward me but his dark eyes stay on Marcus. “Sorry but your girlfriend can’t stay.”Ah, bingo. He does think I’m a groupie.
Marcus grins and pulls me closer until the side of my face is smashed against the Pinterest across his chest. “She’s trying out, not me.”
An eyebrow arches. Otherwise, the angles of his face remain stoic. “Then I guess you need to leave.”“Come on,” Marcus says. “I know Justin.”His placid expression doesn’t change. “I don’t give a shit if you’re his long lost brother.”Marcus’s lips form a tight line as the guitar player stares him down. Luckily, the singer comes over and gives Marcus a fist pump. “Dude, you trying out?”
“I wish. But no.” He turns to me, smiling wide. “Justin, this is Riley.”Justin looks me up and down. His gaze pauses two seconds too long on my cleavage. “You play?”Marcus laughs. “She was supposed to play at—”
I nudge him in the ribs and nod.
“Cool.” Justin grins and dimples groove his cheeks. “We’ve never had anyone so hot audition before.”
The guitar player’s eyes roll. “We’ve never had a girl audition so who exactly are you referring to?”
Justin’s dimples disappear as he scowls at his band mate before looking back to me. “We’re waiting for at least one more guy, but we’re going to start without him.”
The guitar player nails me with a narrowed look and crosses his arms over his plain t-shirt. “Why don’t you go first, Riley?” His tone is smooth but I catch the undertone of sarcasm in his voice. He doesn’t think I can play. Because I’m a girl?