Author Interview
I'd like to welcome Megan Thomason to the blog today, it is a pleasure to have you here.
Please tell us in one sentence only, why we should read your book.
Full of competing agendas, romantic entanglements, humor, twists and turns, daynight is “sure to win over YA readers looking for a dangerous, dystopian adventure story”—Kirkus Reviews.

What inspired you to want to become a writer?
I wrote endless stories as a child, was one of the few who loved to write essays in college, and had a post-college career in the software industry where I wrote business, marketing and product plans. But it wasn’t until my husband decided to write a middle grade fantasy novel, Max Xylander and the Island of Zumuruud, that I considered writing my own book. I helped my husband with plotting and editing and loved being absorbed in the characters and story. Afterwards, I came up with an idea for a teen romantic comedy and my daughters begged me to write the story, which ended up as the trilogy: the thin veil, the thin line, and thin skin. From there, I decided to take on the much more ambitious project of daynight and have been absorbed in the world of Thera and lives of Kira, Blake and Ethan ever since.

Any other books in the works? Goals for future projects?

I’m targeting a summer release for the sequel to daynight, arbitrate. It would be hard to give any teasers forarbitrate without giving spoilers for daynight, but suffice it to say that there will be just as many surprises, twists and turns. Readers will get to see a lot more of Thera, as well as get to know the main characters and a couple key secondary characters a whole lot better :).
In addition to the daynight series, I’m working on B*Lies, a story about a girl who makes the decision to run from her abusive father. If time permits, I’ll also do a re-write on the romantic comedy trilogy I wrote prior todaynight: the thin veil, the thin line, and thin skin. Although I love the stories and characters, I’d want to get the writing up to my current standards before publishing.
Beyond these projects, I’ll continue with the daynight series until the story is finished, and then I have lots of other stories in the mental works to follow.

If you were stranded on a desert island what 3 things would you want with you?
How equipped is my desert island? Does it come with the basic necessities of a large pot, solar generator, tarp, lighters, Swiss army knife, medicine, fishing pole, and sleeping bags? If so, I’m bringing the ultimate entertainment package:
My family
My iPhone (thousands of books on it, games, phone to keep in touch...)
My 11” MacBook Air (I’d have a heck of a lot of downtime to write!)
If my island doesn’t come with the basics, then sigh, I’m bringing a fully fueled, top-of-the-line seaplane, pilot, and a giant waterproof box with food and water for a week. I’d vacation until the food ran out, and then have the pilot take me home. Even Gilligan got stranded with a bunch of gear ;).
If you could jump in to a book, and live in that world.. which would it be?
As a kid, I’d have picked The Phantom Tollbooth, The Hobbit, or From the Mixed Up Files of Mrs. Basil E. Frankweiler (I seriously dreamed about living in the Met for years). There are a lot of worlds I’d like to visit (worlds of Brave New World, Hunger Games, Divergent, The Unidentified, The Scorpio Races, The Night Circus, 1984, Minority Report, Ender’s Game, Chronicles of Narnia, Amber Chronicles, Feed to name a few), but to live? I’m going to have to stick with Middle Earth and live in Bilbo Baggins’ Hobbit hole. It’s fully stocked with food and has a cool, round door. I might get to journey with Gandalf, meet Gollum and steal ‘my precious’, slay a dragon, find a lot of gold, and learn to use some awesome weapons.
What is your favorite quote?
After growing up with Murphy’s Law firmly affixed to my mother’s desk, I can’t say I’m much of a quote person. But, I do love this quote from Brave New World… I disagree that happiness isn’t grand, but the opposite can be a whole lot more interesting—particularly when reading and writing!
"Actual happiness always looks pretty squalid in comparison with the overcompensations for misery. And, of course, stability isn't nearly so spectacular as instability. And being contented has none of the glamour of a good fight against misfortune, none of the picturesqueness of a struggle with temptation, or a fatal overthrow by passion or doubt. Happiness is never grand." —Aldous Huxley 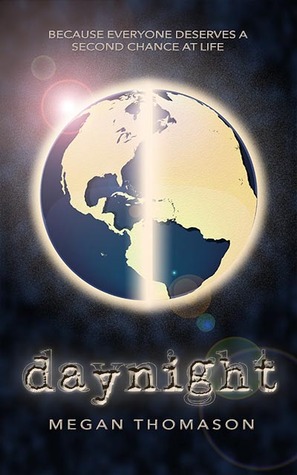 Meet Kira Donovan. Fiercely loyal, overly optimistic, and ensnared by the promise of a full-ride college scholarship, Kira signs the SCI Recruit contract to escape memories of a tragedy that left her boyfriend and friends dead.

Meet Blake Sundry. Bitter about being raised in Exile and his mother’s death, Blake’s been trained to infiltrate and destroy the SCI. Current barrier to success? His Recruit partner—Miss Goody Two Shoes Kira Donovan.

“The writing is impressive and the story is a real page-turner. So many twists and turns… I’m hooked… I can’t wait for the next installment to come out…4.5 out of 5 stars”—Self-Publishing Review

“Plot twists kept me reading till late at night”—Amazon reviewer

“Every page a thrilling experience”—Amazon reviewer

“It's like a CW fantasy TV show in a book with a really interesting environment.”—Amazon reviewer

“I'm a little tired of dystopian novels, but Daynight has a unique and fresh story line that didn't have any trouble keeping my interest.”—Amazon reviewer

Megan Thomason lives in paradise aka San Diego, CA with her husband and five children. A former software manager, Megan vastly prefers writing twisted tales to business, product, and marketing plans. When she isn't typing away on her laptop, she's reading books on her phone—over 600 in the last year—or attending to the needs of her family. Megan’s fluent in sarcasm, could potentially benefit from a 12-step program for road rage, struggles with a Hot Tamales addiction, loves world travel &amp; fast cars and hates paperwork &amp; being an insomniac. Daynight is Megan's first published novel, but fourth written one.

Open only to those who can legally enter, receive and use an Amazon.com Gift Code or Paypal Cash. Winning Entry will be verified prior to prize being awarded. No purchase necessary. You must be 18 or older to enter or have your parent enter for you. The winner will be chosen by rafflecopter and announced here as well as emailed and will have 48 hours to respond or a new winner will be chosen. This giveaway is in no way associated with Facebook, Twitter, Rafflecopter or any other entity unless otherwise specified. The number of eligible entries received determines the odds of winning. Giveaway was organized by Kathy from I Am A Reader, Not A Writer http://iamareader.com and sponsored by the author. VOID WHERE PROHIBITED BY LAW.