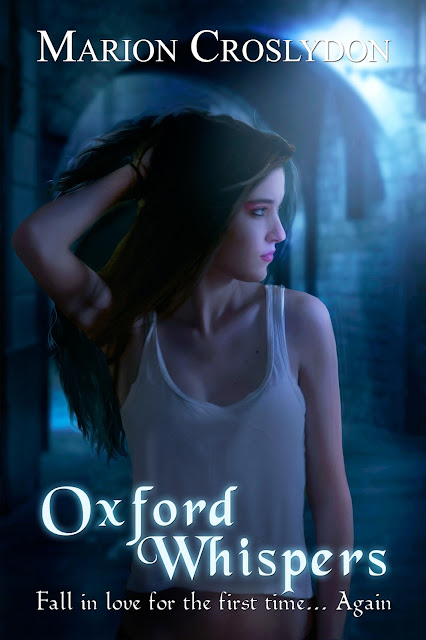 Madison LeBon is dead set against the dead. She has vowed to ignore her Voodoo-stamped heritage and the psychic gift passed down through her Louisiana family. The world of the living is where she wants to belong.

But her resolution shatters when the tragic lovers in a painting—the subject of her first history class at Oxford—begin to haunt her. The lovers warn her against their own nemesis, a Puritan from the English Civil War.

College becomes more complicated when Madison falls hard for Rupert Vance, a troubled aristocrat and descendant of one of the characters in the painting. With the spirit of a murderer after her, she realizes that her own first love may also be doomed…

FALL IN LOVE FOR THE FIRST TIME... AGAIN

Coffee and Marshmallows.
He had stopped their impromptu tour in front of an old-fashioned-looking coffee shop.“You want a coffee?” she asked.The corner of his mouth curled up. “Chocolate! Hot, sweet chocolate with lots and lots of marshmallows.”Yummy. “I’d love that.” Madison had to keep her tongue from licking her lips in anticipation.
“I know. You asked for some at the Anchor Inn, remember?” She did, but the realization he had paid attention to her order on that day rendered her all mushy inside. “This place is the best place in England. I vouch for it.”
She failed at refraining a giggle. He opened the door for her and they stepped into heaven… or the nineteenth century. Everything inside was decorated as Madison imagined a drawing room would have been under Queen Victoria’s reign. Sturdy, dark, polished wood everywhere, elegant sofas, flowery wall-paper. The warmth dispensed by the fireplace in the right corner seeped through her. Her muscles relaxed.Rupert was looking at her expectantly. “Do you like it?”“What’s not to like?”
He undid the tight knot of her scarf. “Make yourself comfortable. I’m getting the order.” He nodded towards a small couch next to the fireplace.She dropped her duffel coat and satchel on the floor and settled against the plump cushions. A mouth-watering aroma drifted towards her, a mélange of cinnamon and caramel… and fresh-baked brownies.When Rupert walked back towards her, he carried a round silver tray. He settled the bowls on the table and sat next to her. Quickly he removed his thick navy jacket and threw it on top of Madison’s coat.She cupped the porcelain bowl, all dainty and warm, and let its warmth spread through her palms.“I’ve added a hint of vanilla,” he said, his hands and overall posture mirroring that of Madison’s.“Good initiative.”Rupert lifted his bowl and tipped it toward Madison. “Cheers!”“Cheers!”They brought the hot beverage to their mouths. A couple of the mini-marshmallows slid through her lips and she let them melt on her tongue. She closed her eyes. The sensation was divine, its effect heightened by the heat of the flames in the fireplace brushing her face.Madison let herself drown into the moment, her knee against Rupert’s. She could feel him immobile next to her.When she opened her eyes again, heat spread through her cheekbones, across her nose. Rupert stared at her, just stared at her, oblivious of anything else around him.Their gazes locked. She swore she could hear both their hearts beating in sync.
“My mum used to take me here on our drives from London to Magway.” His eyes didn’t leave Madison’s. “It was a tradition… but I haven’t come back here since my last time with her.”“You became too cool for chocolate, marshmallows, and spending time with your mamma,” Madison teased him, taking another sweet sip.A shadow passed over his face. “Something like that.”Madison thought he was about to say more, but he reverted his attention to the chocolate. They remained silent for a few minutes, comfortable in each other’s close proximity.
Because it was the first of December, a string of Christmas classics had already played out since they had stepped into that sweet paradise. Tom Jones’ baritone voice was currently warning them it was cold outside. Madison knew that, and, really, she had no intention to ever step a foot outside that place.The weight of Rupert’s gaze had reverted on her. His half-smile was topped by a grin in his eyes.“What?” she asked.“You have some white foam at the corner of your mouth.” His index finger waved lightly. “May I?”Her mouth dried in anticipation. Because words failed her, she answered with a tight nod. Rupert leaned toward her, took a small napkin from the silver tray and wiped it gently over where the cream must have been.
“There, all clean now.”His thumb stayed at the corner of her mouth, shifted an inch to brush her lower lip.His eyes were moving back and forth between her own eyes and her mouth, settling there.Was he going to kiss her?He was going to kiss her.Please, God, have him kiss me.But Rupert’s cell rang, returning them to the present. Without hiding his irritation, he took the call. Madison swallowed her disappointment. Hard. 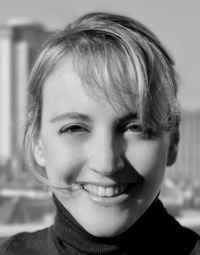 In addition to being an author, I work as an entrepreneur, wife and mother-of-one but spend a good deal of time with books, DVDs and listening to my mp3 player; all for the sake of inspiration, of course.

My debut series, The Oxford Trilogy, has been a blast to write because I can indulge in my favorite types of music: Country and English rock.

My main goal as a writer is to make readers dream bigger and cause their hearts to beat a little faster.
Since my writing is all about sharing dreams and stories, I love connecting with fellow readers and authors.

a Rafflecopter giveaway
Posted by Sabina at 19:34