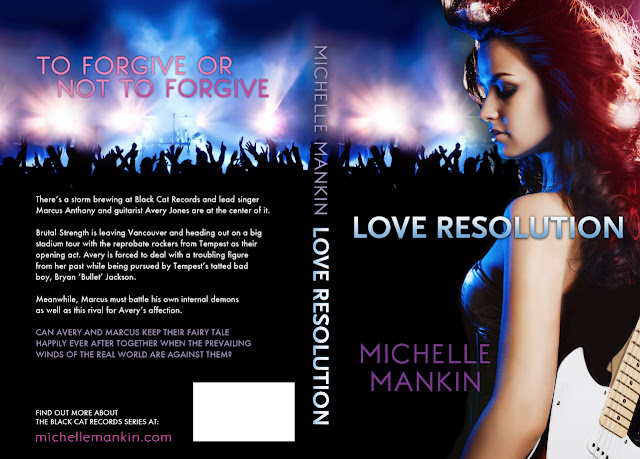 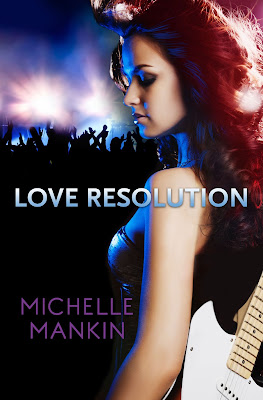 Book Description:
There’s a storm brewing at Black Cat Records and lead singer Marcus Anthony and guitarist Avery Jones are at the center of it.
Brutal Strength is leaving Vancouver and heading out on a big stadium tour with the reprobate rockers from Tempest as their opening act.
Avery is forced to deal with a troubling figure from her past while being pursued by Tempest’s tatted bad boy, Bryan ‘Bullet’ Jackson.
Meanwhile, Marcus must battle his own internal demons as well as this rival for Avery’s affection.
Can Avery and Marcus keep their fairy tale happily ever after together when the prevailing winds of the real world are against them?
Love Resolution is the third book in the Black Cat Records series.

Author note: Each book in the Black Cat Records series can stand alone. The first, Love Evolution is appropriate for all ages. The second, Love Revolution, and the third, Love Resolution, are for mature teens/new adult. 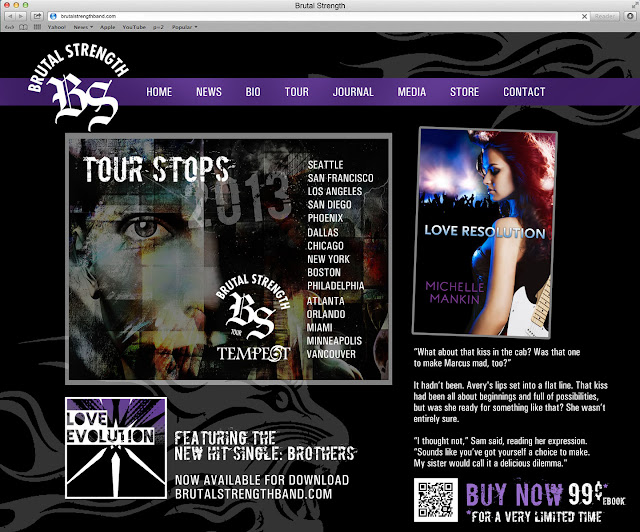 Reclining against the back of the garden tub with her eyes closed, she knew the moment he stepped into the room by the way her body reacted, tingling with an awareness that had always been there between the two of them. Even when she’d been disguised as a guy.
Heat that had nothing to do with the temperature of the bath flooded her veins. She opened her eyes to find him leaning back against the door frame looking at her with a heavy lidded gaze. Steam billowed from the white porcelain mug cupped in his masculine hands. Slowly, the focus of his gaze lifted from where her breasts peeked out above the surface of the bubbles to her face. Looking pointedly at the mug, she arched a brow. “Is that for me?”
“The tea you mean?” Marcus asked suggestively, giving her a sexy half smile.Avery reached out with a soapy arm to take the mug he offered her. “The tea will do… for now,” she said, playing along. Blowing over the top before taking a sip, she sighed with pleasure at the first taste of the rich exotic brew. Warmth from the tea slid down her throat while the passionate expression on Marcus’ face fueled warmth of a different sort.
Purposefully, she sat up further in the water, feeling the bubbles sliding down to her waist. Eyes darkening to deep sapphire followed their path with focused concentration. She started to bring the tea to her mouth again when he abruptly reached for it and removed it from her hands.
The mug clattered as he set it down on the black granite countertop. He grabbed a thick white bath towel off the warming rack. Wordlessly, he unfolded it and held it outstretched for her to step into. “You are so beautiful,” he said watching her rise from the tub.He wrapped her flushed body in the soft heated towel and swept her off her feet. Cradled tight to his rock-hard chest, she found herself swiftly carried to the bedroom. Her heart hammered excitedly against her ribs as he laid her out on the king sized bed and began to caress her body. With calloused fingertips he expertly stroked her like an instrument that he had mastered. She’d never had a lover like Marcus. Not that there had been many before him. But she could never have imagined anyone making love to her the way he did. Like it was a physical expression of what he felt inside his soul.He ran his hands across every inch of her sensitized creamy white skin plucking lightly in certain areas, circling teasingly in others, always seeming to intuitively know where and how to touch in a way that would give her the most pleasure. By the time he covered her body with his own she was trembling and ready. She moaned deep in her throat at the exquisite feeling of completion she felt when he finally brought their bodies together.
Over the past week she’d sensed his lovemaking taking on an even higher level of intensity than usual as if he was savoring each moment. Now he made love to her so tenderly and so patiently that it took only moments before he’d coaxed from her the ultimate crescendo. And as it always was between them, after she cried out his name, he soon followed, dampening her vocal release with his mouth over hers, as if he were drinking in her essence.


Michelle Mankin is a young adult romance writer as well as a self- proclaimed giant... inside of her own mind!
For many years she worked in the insurance industry as an underwriter. Somehow, the boredom didn't kill her but the hour and hours of looking at facts and figures provided ample time for her mind to wander.
Love Evolution is her debut novel. A rock 'n roll romance based on Shakespeare's Twelfth Night. It is the first in a planned trilogy using the plot underpinnings of Shakespeare combined with the drama, excitement, and indisputable sexiness of the rock 'n roll industry.

When she is not putting her daydreams down on paper, you can find her traveling the world with her family, sometimes for real, and sometimes just for pretend as she takes the children to school and back.

Giveaway
(1) Print or ebook copy from Amazon of Love Resolution. Print copies are US/Canada only. Each book giveaway comes with a BS and Tempest silicone concert bracelet.