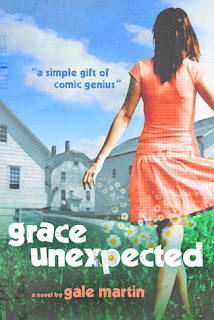 "Thirty-something Grace Savage has slogged through crummy jobs and dead-end relationships with men who would rather go bald than say “I do”. In search of respite from her current job, she visits Shaker Village in New Hampshire. Instead of renewal, she’s unnerved to learn that Shaker men and women lived and worked side by side in complete celibacy. When her longtime boyfriend dumps her instead of proposing, Grace avows the sexless Shaker ways. Resolved to stick to her new plan – dubbed the Shaker Plan – despite ovaries ticking like time bombs, she returns to her life in Pennsylvania. Almost immediately, she's juggling two eligible bachelors: Addison, a young beat reporter; and True, a venerable anthropology professor. Both men have ample charms and soul mate potential to test her newfound Shaker-style self-control, and Grace appears to be on the fast track to a marriage proposal… until secrets revealed deliver a death rattle to the Shaker Plan." - Goodreads


This was a case of "it's me, not you." I didn't realise this was a romance type chick-lit book. If I had I probably wouldn't have read it. Romance has a tendency of boring me. Love triangles just bore me twice as much.

The first chapters were good and funny and typical of the chick-lit that I normally read, but I got to the half way mark and had to set it aside. Then it took me forever to pick it back up again. Why? Because I didn't care if she picked Addison or True. I wasn't interested in the romance which was the main plot. The little mystery part of the plot had me read those chapters quickly even though I knew who the "villlian" was, I still wanted to confirm it and see how it ended up, but the rest of the story just didn't interest me.

The characters were so-so. Goody was great in the beginning when his character first appeared, but as the story progressed he seemed to forced and over done.

The pacing was ok, just a bit uneven. It started ok, then there was just a lot of chatter and thoughts which slowed it down, then it picked up with the mystery, then it slowed down again. There were a lot of points were nothing was really happening because Grace was just talking or thinking about Addison this, and True that.

I didn't hate this, but it just wasn't my type of book. I did however still find it enjoyable. So, Yes, it is just me - not the book.
If you like light reads and chick-lit romance stories, give this a try, I'm sure you'll enjoy this.