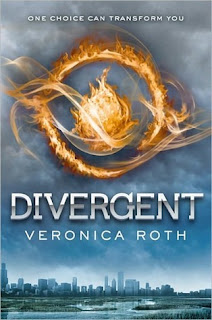 I really enjoyed this book and I've been thinking about this review for a couple of days but I'm none the wiser about what to say.
In a dystopian Chicago, society is divided into five factions. Candor (honesty), Abnegation (selflessness), Dauntless (bravery), Amity (peacefulness), and Erudite (intelligence).
Once a year all 16 year olds need to select which faction they wish to live in for the rest of their lives. Once selected they go through an initiation with there new faction. If unsuccessful they live amongst the factionless.
Our protagonist Beatrice is from Abnegation but doesn't feel she belongs there because she isn't selfless enough. She has a difficult choice but chooses to go to Dauntless (and have a name change to Tris) who have a highly competitive initiation - which Beatrice does well in ;)
The characters are well defined with Tris being a strong, interesting lead.
After the initiation the story takes an interesting twist.
Divergent is well written, and filled with action.
My challenge with writing this review is that although I really liked it, and wanted to read it, I also had no problem putting it down and not picking it back up again until I had time, which you can see by how long it took me to read it. Normally if I really like a book I have trouble putting it down. That being said I have started Insurgent straight after and I know it is because I want to know what happened to Tris.
Either way, I'd recommend this to any dystopian fan to read.
Posted by Sabina at 15:18