I'm excited to have an interview with Gina Marie Long, the author of Rocked, to share with you today. I hope you enjoy, and check out the Rocked book details further down the post. There is also a giveaway for an ebook copy of Rocked.

Could you tell us a bit about your latest release?
Rocked: A Chelsie Valdar Saga, 1 focuses on Chelsie, a modern-day Viking warrior teenager who lives in Oregon. She has a younger brother, Ash, who is better with his brain than with battles. Throw in shape shifting Bigfoot who look hot and hunky as humans, an abandoned werecat, the search for a mystical weapon, a deranged stalker who is after Chelsie and is power-hungry, and the clock is ticking down to the impending Apocalypse-in one week. The story is suitable for age 13 and up. It’s categorized as young adult, paranormal thriller, urban fantasy.

What have you learned about writing and publishing since you first started?
A lot. I could write an entire book on that, but there are already so many awesome books on the subjects of writing and publishing. I’ve learned that nothing happens as fast as you want it to. There are a world of distractions and shiny things trying to grab my attention all the time. Marketing is incredibly important. Don’t bother “being an author” if you won’t dedicate time to promoting your books. The catch: don’t push books into people’s face, very rarely advertise them, people despise being “sold to”. The answer: network, make connections with people, show you care. The problem: this takes mega-time. And it’s impossible to be everywhere if you are only one person and still hope to write additional books. Oddly, but thankfully, I really love marketing! But the time…eeek! Another thing I discovered since I first started publishing is the number of other writers out there. It is unreal how many people have published books (whether with traditional publishers, self-published, a combo of the two, whatever way). It is difficult trying to let the world know you and your books exist among the sea of other authors’ books. So, hello out there! I’m waving at all of you nowJ

Is there anything you would do differently?
I would not have waited so long in between each of my published books. I wish I hadn’t wasted so much time. It would have also been nice to have had an entire series finished (or close to it) and then start releasing them like boom, boom, boom…have the whole series be out there so when a reader finished reading one, the other was instantly available to buy. I know that is not the norm for authors…you write a book then you publish it. Start over - write then publish. Repeat. I have ADHD and OCD, too, and I believe these mental issues mess with progress and maintaining a productive writing schedule. Sticking to a real work schedule, say Monday through Friday from 8 to 5, just as if I was driving into a regular job, is critical if you want to be a full-time author and want to keep pumping out books, do marketing, and hope to bring in a decent income.

Who, or what, if anything has influenced your writing?
Stephenie Meyer, Anne Rice, Amanda Hocking, Suzanne Collins. I also watch many supernatural and sci-fi TV shows, such as: The Walking Dead, Being Human, Supernatural, Grimm, The Vampire Diaries, True Blood, Beauty and the Beast, Lost Girl, Revolution, Defiance.

Do you plan everything or just let the story flow?
I plan just about everything. I do a major outline before I even start writing the book. The outline is usually 10 pages in length. Handwritten, too, and both sides of the paper! Tons of research, Google Maps, figuring out names, creating the mythology rules for my beings, character traits and things to know about them. I don’t always follow the outline 100%, though. As I write the story, I might realize it’s better to change something than to keep my original plan, especially if what I had scribbled in the outline doesn’t make sense anymore or is boring or inconsistent or I come up with a new kick-butt idea. I’ve even created new characters completely out of the blue midway through the book and some of those characters are so cool!

What is your favourite food?
Pizza.

Are you a morning person or a night owl?
Morning (although I am found on many occasion at the computer at 10:30 at night).

Where do you dream of travelling to and why?
Montana, perhaps around the Missoula area. We have toyed with moving there.

Do distant places feature in your books?
Not sure how to answer this one. I’ve published three books and all are set in the present time (not the past or in the future). Some of the locations have been my hometown area (Highland, Illinois), Kentucky, Massachusetts, Oregon.

Do you listen to music while writing?
Sometimes I do listen to music that I have on my iPod or I’ll turn the radio on. Other times, the music is too much of a distraction and I’ll turn it off. I DO love listening to music, though, and have an enormous collection!!

What are three words that describe you?
Hyper, talkative, animal-lover.

What's your favourite book or who is your favourite writer?
It’s impossible for me to narrow it down to a favorite book or writer. I sit here and try, but too many titles and authors flood my mind. The best I can do is list authors I love: Anne Rice, Amanda Hocking, Stephenie Meyer, Christine Feehan, Jacquelyn Frank, Karen Marie Moning, Heather Brewer, Morgan Rice, J.L. Bryan, J.A. Konrath, Suzanne Collins, Stephen King, Justin Cronin, Maggie Stiefvater.

Synopsis:
The Apocalypse is coming...in one week. Chelsie Valdar and her brother are modern-day Viking warrior teenagers. They must find a mystical sword belonging to their ancient ancestor and flee to safety at a secret shelter, if they hope to survive. As the clock ticks, several Bigfoot and an outcast werecat become invaluable friends helping with the search for the sword and offering supernatural protection. Misfortune haunts their every move. Conflicts delay their progress. Especially when a devious and deranged enemy is infatuated with Chelsie and hungers for the sword, desperate to escape to the shelter with Chelsie by his side. Time is running out.
Buy Links
Amazon
Smashwords
Barnes & Noble 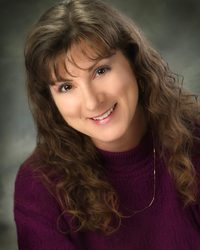 Gina Marie Long is an author of paranormal thrillers, urban fantasy, and young adult novels. She has written the Unknown Touch-Werewolf Series and Rocked – A Chelsie Valdar Saga.
Gina's fiction stories are inspired from her interest in the supernatural, science fiction and fantasy world. She enjoys reading, watching evening TV shows, movies and listening to music. Writing indulges her passion for the entertainment arts, giving her active mind a playground of possibilities to explore. She stays active on social media sites and blogging, making connections with others who share the same interests.

She writes about werewolves, vampires, witches, werecats, Bigfoot, an occasional demon, psychics, Vikings, and riveting human characters. But not ALL in the same book! In addition, a light romance is included to spice things up (come on-every book, movie and TV show has some sort of a love story in it). The books do not fall under the romance category...just enough in the storyline to satisfy the girls. And the boys can breathe easy with the knowledge that they're not reading a romance novel but a paranormal thriller, instead. Depending on which series, the ages of the main characters are 16 through 30. Most are on the younger side.

"It's exciting to create strong characters that the readers fall in love with…or want to strangle! Writing books about other beings, such as werewolves and vampires, allows rules to be broken concerning life and the world as we know it. The idea to have these supernatural species living and breathing among us is so wickedly intriguing. Having close contact with them, developing relationships, and dealing with the good vs. the evil - it sweeps you away into another reality – an escape from real life. You wonder and worry about what the characters will stumble upon next. Or, what horrific tragedy knocks them flat on their faces."~~Gina
She lives in Highland, Illinois, with her husband and Jessie Cat.