I'm so excited to be a part of the Chantress blog tour hosted by Shane @ Itching For Books! There is a tour wide giveaway, and don't forget to visit the other stops. 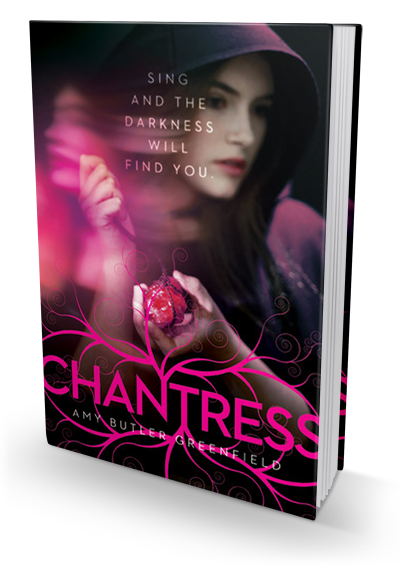 Lucy’s Chantress magic will make her the most powerful — and most hunted — girl in England.
“Sing, and the darkness will find you.” This warning has haunted fifteen-year-old Lucy ever since she was eight and shipwrecked on a lonely island. Lucy’s guardian, Norrie, has lots of rules, but the most important is that Lucy must never sing. Not ever. Now it is 1667, Lucy is fifteen, and on All Hallows’ Eve, Lucy hears a tantalizing melody on the wind. She can’t help but sing — and she is swept into darkness.
When she awakes in England, Lucy hears powerful men discussing Chantresses — women who can sing magic into the world. They are hunting her, but she escapes and finds sanctuary with the Invisible College, an organization plotting to overthrow the nefarious Lord Protector. The only person powerful enough to bring about his downfall is a Chantress. And Lucy is the last one in England.
Lucy struggles to master the song-spells and harness her power, but the Lord Protector is moving quickly. And her feelings for Nat, an Invisible College apprentice and scientist who deeply distrusts her magic, only add to her confusion…
Time is running out, and the fate of England hangs in the balance in this entrancing novel that is atmospheric and lyrical, dangerous and romantic.

Excerpt
No sooner has they left than, the theif sprinted out of hiding. I caught my breath; I had half forgotten he was there. making for the fireplace, he touched the wall beside it with a practiced hand. When the hidden panel sprang out, he ducked down and pulled it shut behind him.
Where did he go? was my first thought.
And then: Can I follow?
Shaky-limbed from the enforced stillness, I stumbled out from the draperies. Black and glossy as spilled ink, the wood carvings around the fireplace were a rich jumble of fruits and trailing vines. When I peered closely, I could see the tracings of separate panels, but I had no idea which one hid the passageway, or how to open it.
Apples, pears, grapes. Heart racing, I pushed and pulled at each craved fruit. Nothing moved.
"Why should I remove my coat?" Giles shouted from the hall. "I've not so much as touched one of those poxy books!"
How close he sounded! I looked over my shoulder and saw that the library door was still ajar. At any moment, someone could walk in and see me.
Panic made me hit the next bunch of apples hard. A stem slid to one side, and a panel swung open, revealing a narrow staircase that led down into the dark.
Another bellow went up in the hallway. there was no time to think. I hopped through the panel and pulled it shut behind me.
Alone in darkness, I stood at the top of the stairs. It was too late to go back and get a candle. All I could do now was to try to get out - and not cross paths with the thief who had led me here.
The thief ... where was he? In this blackness he could be standing five feet away, and I would not know it.
I held my breath and listened. Nothing. 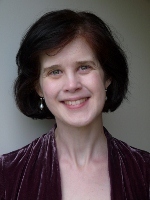 Amy Butler Greenfield was a grad student in history when she gave into temptation and became a writer. Since then, she has become an award-winning author. Born in Philadelphia, Amy grew up in the Adirondack Mountains and later studied history at Williams College, the University of Wisconsin-Madison, and Oxford. She now lives with her family in England, where she writes, bakes double-dark-chocolate cake, and plots mischief.
Official links: www.amybutlergreenfield.com | twitter.com/ab_greenfield

a Rafflecopter giveaway
Posted by Sabina at 20:54