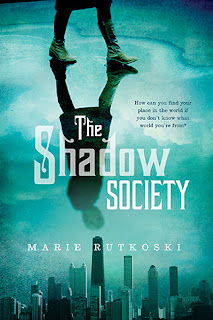 Darcy Jones doesn’t remember anything before the day she was abandoned as a child outside a Chicago firehouse. She has never really belonged anywhere—but she couldn’t have guessed that she comes from an alternate world where the Great Chicago Fire didn’t happen and deadly creatures called Shades terrorize the human population.
Memories begin to haunt Darcy when a new boy arrives at her high school, and he makes her feel both desire and desired in a way she hadn’t thought possible. But Conn’s interest in her is confusing. It doesn’t line up with the way he first looked at her.
As if she were his enemy.
When Conn betrays Darcy, she realizes that she can’t rely on anything—not herself, not the laws of nature, and certainly not him. Darcy decides to infiltrate the Shadow Society and uncover the Shades’ latest terrorist plot. What she finds out will change her world forever . . .
In this smart, compulsively readable novel, master storyteller Marie Rutkoski has crafted an utterly original world, characters you won’t soon forget, and a tale full of intrigue and suspense. - Goodreads

Another dystopian with a very intriguing and, I'm happy to say, unique premise of alternate dimensions. I find alternate dimensions to be such an interesting subject and even though it didn't go into great detail concerning the alternate Chicago, it was still captivating. This certainly has an original plot. The notion of Shades - how they live, what they can do - was enchanting.

I found the pacing uneven, and there were times throughout the book I didn't think I was going to finish it. The story slowed down and I was mildly bored with it. I just wanted it to "get on with it" so to speak. In the next percentage it picked up and I didn't want to put it down, then it would slow down again.

Darcy was ok. She's flawed but otherwise a good lead character. There aren't a lot of secondary character interaction. You meet Darcy's friends in the beginning, and Orion later on, plus a few other more minor characters. Darcy and her love interest, Conn, are the major characters. Now the relationship between Conn and Darcy isn't very insta-loveish. It built throughout the novel. It doesn't drive the plot though it is important throughout the story.
Conn is a intricate  character and a little difficult to get to like, or even to know if you should believe him.
I just want to add, that right in the beginning as Darcy and Conn meet at school, and his motorbike, and the classroom interaction, etc it instantly made me think of Bella and Edward and I struggled to get through and past that part (I wasn't a fan of Twilight). It wasn't until later that that feeling disappeared.

This isn't a perfect novel but it worth the read for the originality of it alone. It wont change your life, but as a standalone read it's one for those days you want to read something lighter and a satisfying ending.

"But there's not enough time. There never is. Not for anybody in this whole universe. We always want more. Why waste it doing nothing?" ~ Loc 1248 Kindle

"Anyway, a Greek philosopher was talking about a river when he wrote 'Everything flows.' he said that you can't step into the same river twice. Even if you set your foot in the very same spot, nothing is the same. Everything is different. You are different. The river has gotten warmer. The sun shines with a different light." ~ Loc 2292 Kindle


Thank you to Macmillan Childrens Publishing and netgalley for the eARC.