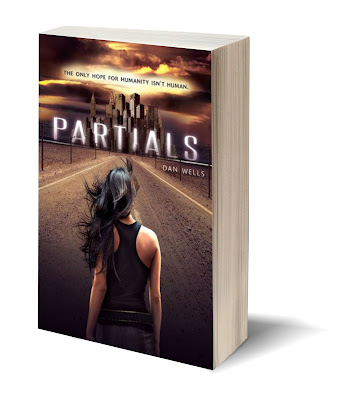 The human race is all but extinct after a war with Partials--engineered organic beings identical to humans--has decimated the population. Reduced to only tens of thousands by RM, a weaponized virus to which only a fraction of humanity is immune, the survivors in North America have huddled together on Long Island while the Partials have mysteriously retreated. The threat of the Partials is still imminent, but, worse, no baby has been born immune to RM in more than a decade. Our time is running out.

Kira, a sixteen-year-old medic-in-training, is on the front lines of this battle, seeing RM ravage the community while mandatory pregnancy laws have pushed what's left of humanity to the brink of civil war, and she's not content to stand by and watch. But as she makes a desperate decision to save the last of her race, she will find that the survival of humans and Partials alike rests in her attempts to uncover the connections between them--connections that humanity has forgotten, or perhaps never even knew were there.

Dan Wells, acclaimed author of "I Am Not a Serial Killer," takes readers on a pulsepounding journey into a world where the very concept of what it means to be human is in question--one where our humanity is both our greatest liability and our only hope for survival.- Goodreads

Partials have taken over the earth. Originally developed to fight wars they now rule, but they have an expiration date.
Humans haven't been able to keep babies born alive. Survivors are immune but newborns are not.

I really liked this book, but it took me awhile to get into it. I found the beginning a little slow and Kira annoyed me. I didn't like her "why haven't you done this" attitude as if she is the only smart person alive. However, after the first, roughly, 25% Kira and some allies set out to find a cure for the RM virus, and this is where the story became more interesting, fast paced and action filled. It was during this latter half of the novel that Kira started to develop as a character, and in turn grow on me.

Kira's boyfriend, Marcus, I'm still not sure about. One minute I'd like him, the next I didn't. He did have a few funny lines such as "well, thanks for not shooting anyone, I guess" said Marcus. "My contribution was to somehow refrain from peeing myself. You can thank me later." (p. 344).

Samm is a partial and he is Kira's test subject. He was a favourite character, I absolutely loved him.

I liked the world building in this. It was superb and feels believable. It adds to an interesting story. There is a surprise in the story (though I kind of guessed it) which adds a new angle. Despite the slow pace in the beginning, the last half definitely was better and made up for it.

I can't wait to get into the second book, Fragments to see how this story progresses.

Dan Wells is a thriller and science fiction writer. Born in Utah, he spent his early years reading and writing. He is he author of the Partials series (Partials, with the second book coming early 2013) and John Cleaver series (I Am Not a Serial Killer, Mr. Monster, and I Don't Want To Kill You). He has been nominated for both the Hugo and the Campbell Award, and has won two Parsec Awards for his podcast Writing Excuses.