What would you do if you woke up in a coffin and discovered you were a vampire?

Um, probably panic and cry in a very undignified fashion. I’m much less tough and resourceful than FANG GIRL’s Jane! But once I’d got a grip on myself, I’d do the same thing that Jane does – phone my family. Who wants to be a solitary creature of the night when you can go back home where there’s bed, broadband, and people who love you?

Do you work with an outline, or just write and go with the flow?

When I first started writing FANG GIRL, I was definitely just going with the flow. The first draft was actually written in just thirty days, as part of NaNoWriMo 2008 (National Novel Writing Month – a yearly challenge where people try to write a whole novel in a month). But given that it took me at least five drafts and an entire year to turn that rough manuscript into something coherent (let alone publishable), I’m now a firm convert to outlining.

Plus, of course, these days I have to outline, because my editor wants to know what I’m going to write before I write it, so she can decide whether or not to buy it! So my second book, NO ANGEL, had a fairly detailed outline… not that I stuck to it.

Which came first – the story or the characters?

I always get a couple of characters first (in this case, Jane and her family), and then have to figure out what story to tell with them. Then it’s an iterative development – I create new characters to meet the demands of that story, but those characters in turn alter the shape of the story so I have to change that, which may mean I have to tweak the characters again… and round it goes!

If you could go to lunch with any author, who would you pick?

I can only have one? Peter S. Beagle, author of The Last Unicorn, which I have probably read more than any other book in my life. I, uh, may also have watched the animated film version every single week between the ages of six and eight.

If I could have lunch with more than one, then I’d want Peter S. Beagle, Steph Swainston, China Mieville, Dan Abnett, Sarah Rees Brennan, Terry Pratchett, Ursula Le Guin, Jacqueline Carey, and Cassandra Claire. Now that would be a literary party to remember!

Is there anything about you that would surprise your readers?

I may be a writer by night, but in the day I’m a professional engineer, developing software for industrial controllers. The cool (and terrifying) way of saying this is: “I design stuff that controls nuclear power plants!” The more accurate way of describing it is “I sit in a lot of meetings where people argue about tiny details in C++ code.” But either way, it’s an awesome job!

Can you give us any hints about book 2?

My next book (out in Fall 2013) is not actually a sequel to FANG GIRL – it’s another YA paranormal comedy with the same style of humour, but it’s not about vampires. It’s called NO ANGEL, so you can probably guess what romantic subgenre I’m poking fun at this time…

I’m working on a sequel to FANG GIRL at the moment, though can’t yet say when (or if) it’ll be released – whether or not my publisher, HarperTeen, decide to buy it will depend on how well FANG GIRL does! But I can tell you that the working title is THANK DOG, and in it Jane meets the inevitable hot shirtless werewolf… who is not quite what she’s expecting. 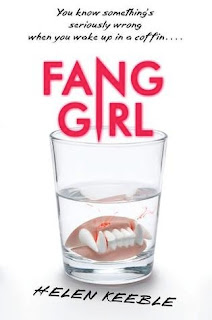 Things That Are Destroying Jane Greene’s Undead Social Life Before It Can Even Begin:1) A twelve-year-old brother who’s convinced she’s a zombie.2) Parents who are begging her to turn them into vampires.3) The pet goldfish she accidentally turns instead.4) Weird superpowers that let her rip the heads off of every other vampire she meets.(Sounds cool, but it doesn’t win you many friends.)5) A pyschotic vampire creator who’s using her to carry out a plan for world domination.And finally:6) A seriously ripped vampire hunter who either wants to stake her or make out with her. Not sure which.Being an undead, eternally pasty fifteen-year-old isn’t quite the sexy, brooding, angst-fest Jane always imagined....Helen Keeble’s riotous debut novel combines the humor of Vladimir Tod with Ally Carter’s spot-on teen voice. With a one-of-a-kind vampire mythology and an irresistibly relatable undead heroine, this uproarious page-turner will leave readers bloodthirsty for more.
Purchase
Amazon
Barnes & Noble
The Book Depository 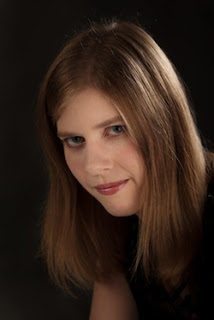 Helen Keeble is not, and never has been, a vampire. She has however been a teenager. She grew up partly in America and partly in England, which has left her with an unidentifiable accent and a fondness for peanut butter crackers washed   down with a nice cup of tea. She now lives in West Sussex, England, with her husband, daughter, two cats, and a variable number of fish. To the best of her knowledge, none of the fish are undead.
Her first novel, a YA vampire comedy called FANG GIRL, is out 11th Sept 2012, from HarperTeen.
She also has another YA paranormal comedy novel (provisionally titled NO ANGEL) scheduled for Sept 2013.
Author Links:
Website
Goodreads
Twitter

It's open internationally, and the last day to enter is December 25th.
The prize pack includes:
- one signed copy of Fang Girl (can be personalised)
- a voucher for an ARC of Helen's next book NO ANGEL as soon as they are available (likely to be Spring/Summer 2013)
- a cheerful vampire goldfish paperclip
- Fang Girl stickers featuring the cover and quotes from the book

a Rafflecopter giveaway
Posted by Sabina at 12:57