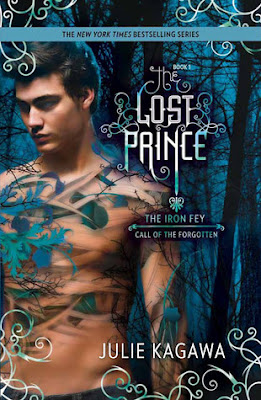 Don’t look at Them. Never let Them know you can see Them.
That is Ethan Chase’s unbreakable rule. Until the fey he avoids at all costs—including his reputation—begin to disappear, and Ethan is attacked. Now he must change the rules to protect his family. To save a girl he never thought he’d dare to fall for.
Ethan thought he had protected himself from his older sister’s world—the land of Faery. His previous time in the Iron Realm left him with nothing but fear and disgust for the world Meghan Chase has made her home, a land of myth and talking cats, of magic and seductive enemies. But when destiny comes for Ethan, there is no escape from a danger long, long forgotten. - Goodreads

This is a little hard for me to review, not so much due to the book, more so that I was in the middle of assessments and then exams when I was reading this. As I wasn't able to read this 'in peace' so to speak so it's a little hard to comment on a few things about it including how I found the pacing.

I saw this on Netgalley and some how didn't realise its a spin off series from Julie Kagawa's Iron Fey series. I saw it was book #1 and being a new Julie Kagawa book I just had to read it. I haven't read the Iron Fey series, and for those of you that haven't, you will be relieved to know that you don't need to have to read this book. There is enough backstory and explanation to read this without trouble.

The story is told by Ethan. Despite his defensiveness and anger, which is for good reason, he gets concerned about a half-breed and finds that exiled fey and half-breeds in the mortal world are disappearing.

Kenzie, who is Ethan's love interest, wasn't someone I liked to begin with. She irritated me for the first half of the book. When their relationship started developing I started to dislike her less. Things moved slowly between them.

I didn't like that Ethan was constantly thinking about her, such as "Soft, feathery strands of her hair brushed my arm, making my skin prickle and my heart pound"; "I felt my heartbeat stutter"; and other I just want to hold her moments. I'm sorry but I have never heard a guy speak like this, and it was throughout the book. I also didn't like Kenzie's over use of "tough guy" either.

There was also a lack of action with the fey. Ethan was always saying how you can't trust them, how awful they were, but there wasn't really much of it going on. The only danger was from the new fey, and even those moments were rare. I would have liked to have a few more action moments overall.

That being said they were the only things I didn't like, the rest of the book was great. This is clearly going to have a sequel and I'm looking forward to what will be happening.


Thank you to Harlequin Teen and netgalley for the eARC.