Cover Reveal: The Rules Of Regret by Megan Squires 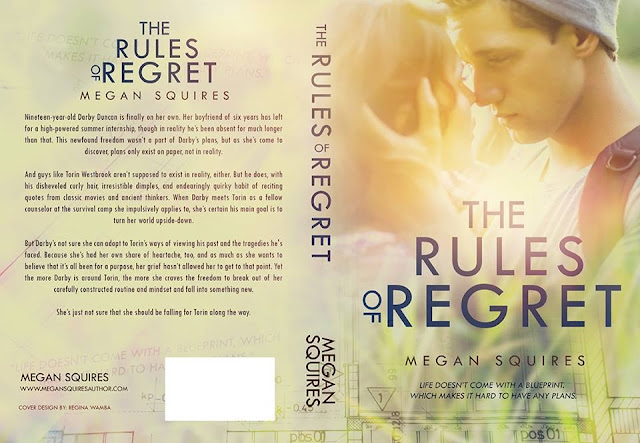 “Life doesn’t come with a blueprint, which makes it hard to have any plans.”Nineteen-year-old Darby Duncan is finally on her own. Her boyfriend of six years just left for a high-powered summer internship, though in reality he’s been absent for much longer than that. This newfound freedom wasn’t a part of Darby’s plans, but as she’s come to discover, plans only exist on paper, not in reality.And guys like Torin Westbrook aren’t supposed to exist in reality, either. But he does, with his disheveled curly hair, irresistible dimples, and endearingly quirky habit of reciting quotes from classic movies and ancient thinkers. When Darby meets Torin as a fellow counselor at the survival camp she impulsively applies to, she’s certain his main goal is to turn her world upside-down. But Darby’s not sure she can adapt to Torin’s ways of viewing his past and the tragedies he's faced. Because she’s had her own share of heartache, too, and as much as she wants to believe that it’s all been for a purpose, her grief hasn’t allowed her to get to that point. Yet the more Darby is around Torin, the more she craves the freedom to break out of her carefully constructed routine and mindset and fall into something new. She’s just not sure that she should be falling for Torin along the way.