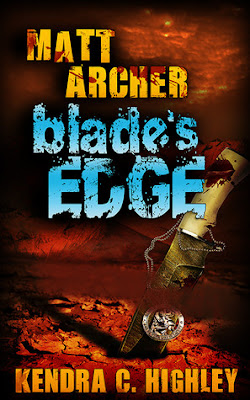 When Matt Archer was fourteen, he discovered monsters are real. As if that wasn’t enough to go on for a few decades, Matt also found out that he’d been chosen to hunt those monsters--with a sentient, supernatural knife. Now fifteen, Matt has spent the last year working with a clandestine military unit, trying to rid the world of monsters, demons and other vicious creatures, all while keeping it a secret from nearly everyone he knows back home in Billings.

Add in a new girlfriend, family secrets, sibling drama and enough homework to sink an aircraft carrier, and Matt’s life has become more complicated than he ever imagined. Worse, the knife has developed some very definite opinions about Matt’s personal life and it interferes in his business whenever it wants. More and more, Matt’s coming to realize that sharing brain-space with a spirit kind of sucks.

When stories of decimated towns and hordes of zombies start pouring into the Pentagon from Afghanistan, Matt knows he’ll be called up soon. Between the new mission and the knife’s increasing control over his mind, Matt wonders if he’ll survive long enough to take his driver’s exam.

“Blade's Edge is an exciting continuation of the Matt Archer series. Kendra Highley did not fall victim to the sophomore funk. She has written an emotional and power story about Matt's horrific journey to rid the world of monsters.” –Kinx’s Book Nook (Amazon)

“I enjoyed Matt Archer: Monster Hunter to the point I was picking it up every time I had spare moments (which are few in my home), but MA: Blade's Edge has blown me away! Ms. Highley has crafted a story that comes to life with vivid images, exciting adventures, and thrilling mishaps that add a touch of humor (driving test, anyone?)” –Kelly C. (Amazon)

“"Matt Archer Blade's Edge" more than delivers what a reader wants from a sequel. The tension and action are taken up a level, as are the mysteries and plot developments.
Best of all, you feel the time passing from book to book and see the characters really grow and change.” –Picky Reviewer (Amazon)

“The Matt Archer books are the best young adult books I've read since I was a young adult! Think Supernatural for a younger audience, but better. I'll be ordering paper copies for my Favorites shelf. Not to be missed!” Sarah G. (Amazon) 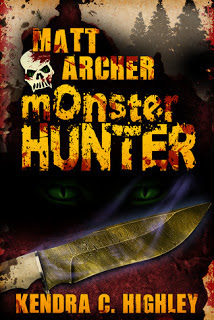 
Fourteen-year-old Matt Archer spends his days studying Algebra, hanging out with his best friend and crushing on the Goddess of Greenhill High, Ella Mitchell. To be honest, he thinks his life is pretty lame until he discovers something terrifying on a weekend camping trip at the local state park.

Monsters are real. And living in his backyard.

But that's not the half of it. After Matt is forced to kill a strange creature to save his uncle, he finds out that the weird knife he took from his uncle's bag has a secret, one that will change Matt's life. The knife was designed with one purpose: to hunt monsters. And it's chosen Matt as its wielder.

Now Matt's part of a world he didn't know existed, working with a covert military unit dedicated to eliminating walking nightmares. Faced with a prophecy about a looming dark war, Matt soon realizes his upcoming Algebra test is the least of his worries.

His new double life leaves Matt wondering which is tougher: hunting monsters or asking Ella Mitchell for a date?

“Terrific page turner; I stayed up half the night reading it, and now I can't wait for the next installment.”  --Amelia Anne (Goodreads)

“The action is quick-paced, abundant and so much fun!!! I can't get over just how awesome of a read this book is; I can't wait for more!!!” --Danielle S. (Goodreads)

“I can't remember the last time I had this much fun reading a book. The eponymous narrator is a very likable and believable hero, the world is rich and detailed….
It has been a long time since I was a teenager, but I'm pretty sure that this book would appeal to an audience of all ages.” -- Misha B. (Goodreads)

“The action doesn't stop. Seriously! I was up until after 1am because I couldn't put it down!” --Riamachia (Amazon)

“It's funny - I thought I was too old for YA stories, and then I realised that I was just looking for the right kind of stories to hold my interest. This is one of those. If you're looking for vampires or angels or similar things that tend to make up YA novels at the moment, you won't find that here - you will, however, find something a bit more awesome.” –Sweartoad (Amazon)

Kendra C. Highley lives in north Texas with her husband and two children. She also serves as staff to two self-important and high-powered cats. This, according to the cats, is her most important job. She believes chocolate is a basic human right, running a 10k is harder than it sounds, and that everyone should learn to drive a stick-shift. She loves monsters, vacations, baking and listening to bad electronica.

Open only to those who can legally enter, receive and use an Amazon.com Gift Code or Paypal Cash. Winning Entry will be verified prior to prize being awarded. No purchase necessary. You must be 18 or older to enter or have your parent enter for you. The winner will be chosen by rafflecopter and announced here as well as emailed and will have 48 hours to respond or a new winner will be chosen. This giveaway is in no way associated with Facebook, Twitter, Rafflecopter or any other entity unless otherwise specified. The number of eligible entries received determines the odds of winning. Giveaway was organized by Kathy from I Am A Reader, Not A Writer http://iamareader.com and sponsored by the authors. VOID WHERE PROHIBITED BY LAW.