Blog Tour: Review & Giveaway: I Am Alive by Cameron Jace 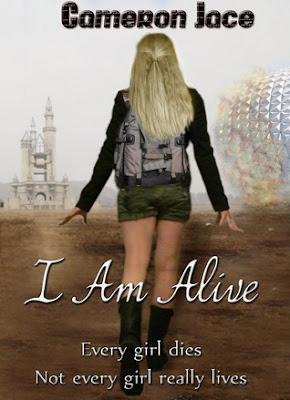 Author Note: starting 12/1/2012 this is a newly professionally edited version

Every girl dies - not every girl really lives.Sixteen-year-old Decca Tenderstone feels captivated when she meets Leo, who is arrogant, silent, beautiful, and shoots almost every one he meets.the usual boring girl meets badboy story... hmm... with a twist ...They live in a dystopian future in Los Angeles where every sixteen-year-old is ranked on a scale from one to ten to determine their future. Outranks, who are considered a danger to society, are forced to attend the Monster Show, a brutal sacrificing ritual that is broadcasted worldwide on live TV, where rebellious teens are labelled Bad Kidz or Monsters and get to fight for their lives in deadly games.To prove that you're still alive you have to scream I Am Alive every six hours. Lower your voice, and you're dead.Decca doesn't need Leo's company. She has secrets of her own. While they both can't stand each other, she will find out why she doesn't fit into any rank.Nothing will stand in her way as she has to make choices concerning love, life, staying alive, growing up, and finding out who she really is.

Review
I Am Alive is based in a society, more specifically a district called Faya, where people are ranked from 1 to 10 when they turn 16. This ranking determines their future. Their career and status in life. A 10 has never been found, and anything under 5 is a "monster". "Monsters" go into an arena, on ranking day, to compete to the death. Those that live through the challenges then fight Carnivore, a genetic mutant tiger. No one wins against him, but if they do they get to be ranked and live with everyone else.

Decca is the main character and the story is told from her POV. She is determined and strong willed. I didn't mind her, but gee was she also very annoying. She "talked to herself a lot", as well as having "flash backs" and dreams.

I liked Leo better. He was originally ranked a 9 but found himself in the monster arena for a song he sung. In the beginning he didn't talk much (for a good reason, and no, I'm not telling) and when he did talk it was brief and to the point. He was all business, and you learn later on why. I kind of enjoyed the fact he irritated Decca.

There were a lot (I felt like there were a lot) of short punctuated sentences. I know they were there for a purpose but I think it was a case of point lost due to the amount of them.
For example:


The world building wasn't too bad, but there were points that I couldn't really picture, especially at the end where she fell. I couldn't picture where she was or the difficulty of where she was.
I was a little confused as to the explanation of why the z's (zwitter instead of twitter for example) and the history when it was discussed towards the end as well as the justification for everything - ranking, arena, etc. It all just seemed to lack purpose.
The ending was a surprise though. I mean I figured it was possible but not to that extent.
The technology was interesting. The iAm's that were really smart smartphones. The clairVos were awesome though hearing others that are experiencing your experiences would be so annoying!

Overall I enjoyed it. I was reading it at night and would look forward to getting into it. While it was very Hunger Games-ish, it was different enough to make it interesting.
This is/was so hard to rate. I don't think it deserves a 3 star rating because it was really good, but I couldn't justify a 4 star rating. So I've done something I haven't done before- I've given a 1/2 star rating. 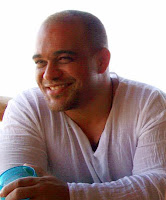 Wonderlander, Neverlander, Unicorn-chaser, enchanter, musician, survived a coma, & totally awesome. Sometimes I tell stories. Always luv the little monsters      I write young adult paranormal romance, urban fantasy, and science fiction mostly. The Grimm Diaries series is a seven book saga that deals with retellings of fairy tales from a young adult POV - it connects most of the fairy tales together and claims to be the truth about fairy tales.      I live in San Fransisco and seriously think circles are way cooler than triangles.
Author Links
Website
Goodreads
Facebook
Twitter
Giveaway
1 ebook copy of I Am Alive by Cameron Jace
Open internationally

a Rafflecopter giveaway
Posted by Sabina at 17:33