Cover Reveal: A Need So Insatiable by Cecilia Robert 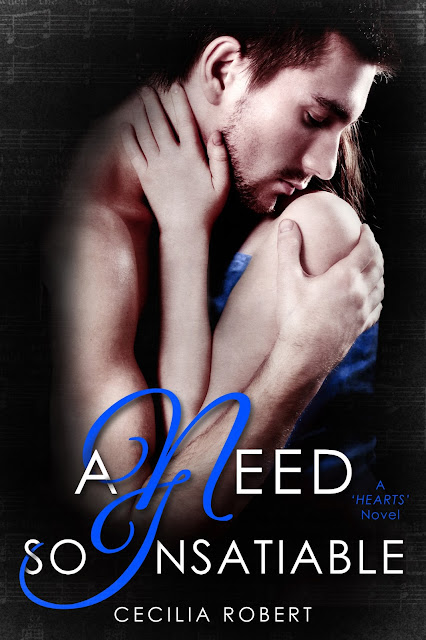 “I’ve never bowed or kneeled for anyone,” Rafael said. “Never thought I would.” Then he was on his knees. He slid his arms around my waist, tugging me closer and bowed his head.
“You own me, Sophie.” He looked up, his dark eyes hitting me with enough force to snatch the breath from my lungs. “You’ve owned me from the moment I walked into your life in that music room. Then I saw you slipping out the window like the wolves were after you and I knew I wanted you in my life. You’ve wrapped yourself in my heart and mind. I can’t get you out. I don’t want to.”

Graduate opera singer, Sophie Fisher’s life is on fire and it’s not her breathtaking voice lighting it, but the trail of debts her father left behind after he passed away a few months ago. If she’s not ducking around corners or slipping out of windows to escape the debt collectors and a slew of characters sent from hell, she’s dealing with her rebellious fifteen-year-old sister, Lilli, who is still coming to terms with their father’s death. And as if that’s not enough, Rafael Van Rees bursts into her life—literally—bringing with him a set of emotions she isn’t prepared to deal with and a life the public had no idea of.

Rafael Van Rees, Maestro extraordinaire, just wants to be left in peace to date whichever woman he feels like, have dinner with whomever he feels like, and just enjoy his life. Until he meets Sophie and his past returns to haunt him. And just when he thought he didn’t care about her, his history proves him wrong. He knows when it comes to her, it’s all or nothing. Besides, she makes him feel fuzzy all over.
Is Sophie’s fire hot enough to melt the ice coursing through his veins?

Cecilia Robert lives in Vienna with her two children, has an incurable obsession with books, anything romantic, TV and medieval architecture. When not working in her full time job, catching up with her two children, writing or reading, she can be found, knitting or crocheting, taking photos of old buildings.