eARC Review: Dare You To by Katie McGarry 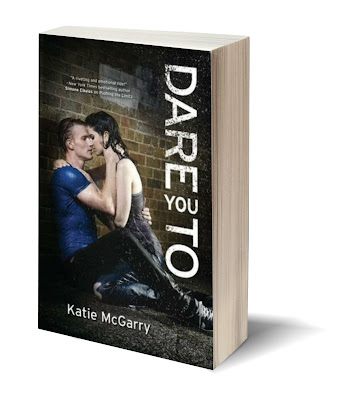 If anyone knew the truth about Beth Risk's home life, they'd send her mother to jail and seventeen-year-old Beth who knows where. So she protects her mom at all costs. Until the day her uncle swoops in and forces Beth to choose between her mom's freedom and her own happiness. That's how Beth finds herself living with an aunt who doesn't want her and going to a school that doesn't understand her. At all. Except for the one guy who shouldn't get her, but does....

Ryan Stone is the town golden boy, a popular baseball star jock-with secrets he can't tell anyone. Not even the friends he shares everything with, including the constant dares to do crazy things. The craziest? Asking out the Skater girl who couldn't be less interested in him.

But what begins as a dare becomes an intense attraction neither Ryan nor Beth expected. Suddenly, the boy with the flawless image risks his dreams-and his life-for the girl he loves, and the girl who won't let anyone get too close is daring herself to want it all...

It took me awhile to get into this book. I don't believe it was the book itself, I think it was just the formatting of the copy I had. The chapters weren't separated other than a few words in capitals and I found it extremely difficult to read as the jump between POV's wasn't clear. I was originally reading it on my mobile, but then I swapped to the kindle for a bigger screen, thinking that might help - and it did. Though I still didn't get the "I can't put this down" feeling I had with Pushing The Limits until I was about 30 - 40% into it. Then I fell in love with the story.

I felt for Beth. I really liked her even though there were points where I thought "you stupid girl". I still liked her, and I could empathise with her, even in those moments, and understand why she did what she did.
I wasn't instantly drawn to Ryan, but he grew on me as the story went on. I thought he was good for Beth which is where some of my frustration came from with her. haha.
I liked Isaiah in Pushing the Limits and I liked him even more in this. He is such a great character and I'm dying to read his story in Crash Into You, but I digress.

Katie McGarry is amazing at writing characters with a troubled background. She makes the story emotional, believeable, and heartbreaking. You connect with the characters, feel for them, and want everything to be better for them. You want the story to have a positive ending, no necessarily a happy ending, just something positive to come out of it for the characters involved. I didn't think it was possible to write a better story then Pushing The Limits, but Dare You To is just was wonderful, if not a little better.

Dare You To could be read as a stand alone. Pushing The Limits will give you a wider view into some of the characters as well as the connections, but it isn't totally necessary.